NSU trial postponed due to the ruling in favor of SABAH 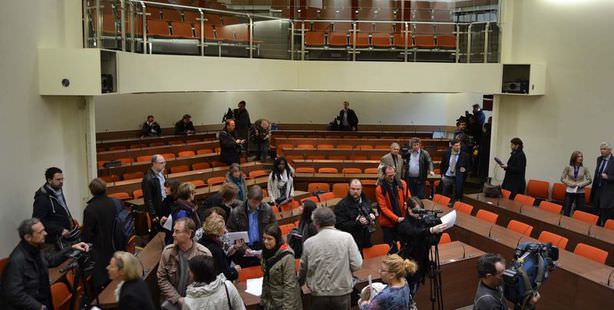 A Munich court said on Monday it would postpone the start of the trial of a suspected neo-Nazi until May 6 after Germany's Constitutional Court ruled in favor of a complaint filed by SABAH that it must provide better access to foreign media.

A Munich court delayed on Monday the long-awaited trial of a suspected neo-Nazi charged over a string of immigrant murders, after being ordered by a higher court to guarantee seats to media from Turkey, where most victims hailed from. The trial of Beate Zschaepe over complicity in 10 racist murders had been due to start on April 17.

The Munich court had allocated 50 seats to all media on a first-come-first-served basis, but none went to Turkish journalists, despite the fact that 8 of the victims were ethnic Turks. This prompted SABAH to lodge a complaint which the German Constitutional Court in Karlsruhe upheld. "In view of the Constitutional Court ruling... a new accreditation process is necessary," the Munich court said in a statement on Monday, adding that it could not complete this process before April 17. In light of the German Constitutional Court ruling in favor of SABAH, the trial, which was previously scheduled to start tomorrow, has been postponed until May 6th.

SABAH Europe Editor-in-Chief Ismail Erel filed the complaint last week based on the fact that members of the Turkish press were not given the same timely information as other German press organs regarding the first-come, first-serve basis of the 50 seats accredited, all which went to members of the German press. On Friday, Germany's Constitutional Court ruled in favor of SABAH and concurred that there were extraneous issues concerning the issuing of accreditation and the failure of the Munich court to provide an appropriate number of seats to representatives from the Turkish press was a violation of equality. The Higher State Court in Munich responded to the ruling on Monday by postponing the first hearing of the trial to May 6th at ten am. "In view of the Constitutional Court ruling... a new accreditation process is necessary," Munich court spokeswoman Margarete Noetzel said in a statement. Noetzel said she had no idea what criteria would be applied in the new process.

WHY DID SABAH FILE A COMPLAINT?

When SABAH Europe Editor-in-Chief Ismail Erel and Munich Correspondent Rahmi Turan were not allocated seats to witness the highly controversial trial due to the accreditation process implemented by the Higher State Court of Munich in which not a single Turkish press member was reserved a seat, SABAH Europe General Manager Mikdat Karaalioğlu authorized famous media attorney Prof. Ralf Höcker to take the case to the German Constitutional Court. The Constitutional Court announced their ruling on Friday, stating that at least three seats need to be allocated to members of the foreign press; however the process of how this would be done was left up to the Munich court's discretion.

Prof. Dr. Ralf Höcker, who served as SABAH's attorney for the case sent to the Constitutional Court referred to the ruling as "disappointing" and said, "The Constitutional Court ruling in no way said that the accreditation for the trial should be reissued entirely, it simply said that three seats should be allocated to members of the foreign press. From our perspective, this was not the best scenario, it was the second best option."

The court ruling in favor of SABAH's complaint will now go down in German legal history as the "SABAH case". The Munich Court has decided to cancel and reinitiate the accreditation process instead of simply allocating three spots to foreign press members, which is the reason behind the trial's delay.

The historical trial, which will now begin in March, is on a neo-Nazi cell the National Socialist Underground (NSU) and of the final remaining living member Beate Zschaepe's complicity in the murder of eight Turks, a Greek and a German policewoman, during a nearly decade-long killing spree. Four others charged with assisting the NSU will sit with Zschaepe on the bench. During the trial, 600 witnesses will be put to the stand while 22 medical experts will be offering their expertise. Up to 280,000 pages of reports on evidence have been read and assessed and compiled into a 488-page indictment for the trial which has 77 intervening parties defended by 53 attorneys. The courtroom, where the trial will be heard has undergone a total 1.25 million euros in renovations, including the set up of microphone systems for simultaneous translators. Speculation is the trial may go on for over two years, with hearings to be held three days a week.

German politicians, media and Germany's large ethnic Turkish community accused the Munich court of insensitivity over its initial refusal to allow more foreign media into the trial. Commenting on the delay of the trial, Mehmet Daimagueler, lawyer of two victims' families, told the Mitteldeutsche Zeitung he was shocked and appalled. "This situation is taking on a slapstick character," he said. Other lawyers said in a joint statement they were "more than angry" over the postponement. "This is the result of the rigid attitude displayed by the Munich court which blocked criticism and rejected proposals for a constructive solution," they said. The Alliance against Nazi Terror and Racism said the delay showed "enormous insensitivity" to families who have been preparing emotionally for the start of what will be for them a painful court experience.

The existence of the neo-Nazi cell only came to light by chance in late 2011 when two members committed suicide after a botched bank robbery. Zschaepe then allegedly set fire to an apartment used by the gang.

At a memorial ceremony for the victims last year, Chancellor Angela Merkel begged the families for forgiveness for Germany's failings and pledged to take action against neo-Nazis.