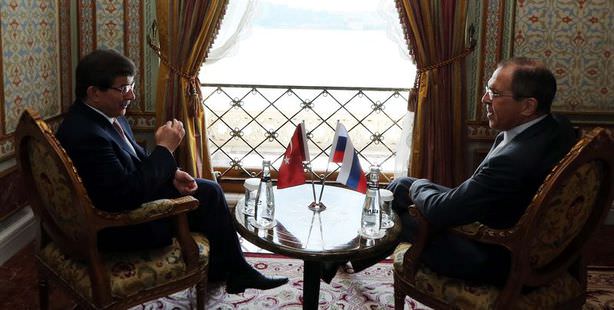 Foreign Minister Ahmet Davutoğlu met with his Russian counterpart Sergey Lavrov who is visiting Istanbul for the third meeting of the Joint Strategic Planning Group between the two countries.

Foreign Minister Ahmet Davutoğlu hosted Russian Foreign Minister Sergey Lavrov for a meeting held at the Çırağan Palace which was followed by a joint press conference. The two foreign ministers discussed the situation in Syria as they enjoyed the magnificent view of the Bosphorus Strait.

During the meeting, Lavrov expressed Russia's sentiment that it is wrong to present Bashar al-Assad's withdrawal from office as a precondition and said, "If Assad relinquishes his position in power, then Syria's state structure will collapse, just like what transpired in Iraq and Afghanistan. However, if there is a controlled transition established, then Assad may resign."

According to information obtained by SABAH, Foreign Minister Davutoğlu stated, "Assad must step aside in order for a political transition to begin immediately. You are right, this situation poses great difficulties for Turkey, however not taking this step due to fear will result in greater errors."

Supposedly, Lavrov smoked a cigarette during his meeting with Davutoğlu, who is known for his staunch opposition to the habit, which he jokingly expressed in front of the cameras. Lavrov responded by saying, "I thought I was your friend," a statement which was greeted with laughter.