Ariboğan: There has been no bloodshed for 85 days 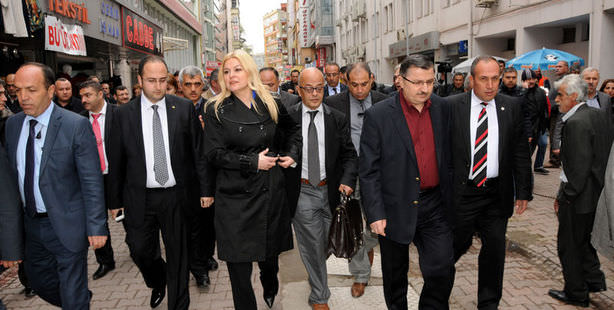 The Marmara delegation of the Wise Persons’ Commission met with reporters in a press conference chaired by Prof. Dr. Deniz Ülke Arıboğan.

In response to a question on the drafting of a new constitution, Arıboğan stated, "We have not announced our opinions regarding the constitution. There may be articles we will be against."

Expressing that this was a first for Turkish democracy, Arıboğan stated, "We want to put forth what the public is feeling and thinking. There may be certain sensitivities politicians are unaware of due to their political blinders." Arıboğan went on to emphasize, "There has been no bloodshed in this country for the past 85 days. However, if the correct road map is not drawn up, then this culture which has been established may apply a new form of violence. Politics should no longer be conducted on people's blood."

The delegation was unable to visit merchants in the Kocaeli region due to ongoing protests and a planned event to release doves in representation of peace was also contested.

The Southeast delegation continued their rounds in the Cizre district of Şırnak on Friday. Cizre residents rained attention on actor and director Yılmaz Erdoğan as delegation members spoke with citizens and the youth in a local tea shop.

Erdoğan talked with students at a "Reader and Writer Meeting" held by the district governorship. The delegation later met with NGOs. During one of the meetings a citizen said, "We are unable to talk freely due to the fact that there are security cameras." Upon hearing this, Kezban Hatemi removed the memory stick from the security camera and requested members of the press step outside.

When the delegation moved on from Cizre to Şırnak, they were greeted by the public with music and folk dancing. The delegation met with five chief village guards. Chief Village Guard Hazım Babat told the delegation, "Despite having lost so many martyrs, we want peace."

Meanwhile, the Eastern Anatolian Region delegation from the Wise Persons' Committee also continued their efforts in Van on Friday.

This is a translation of an article originally written by Abbas Çakar and Abidin Yel.