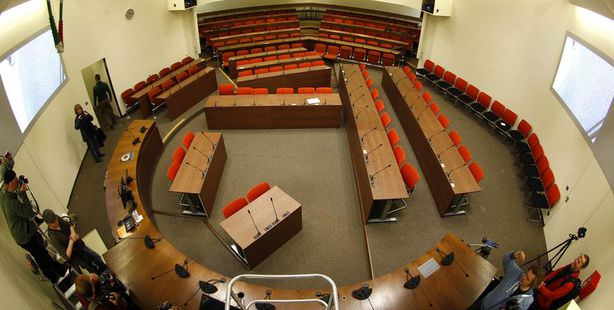 The former press accreditation for the upcoming trial in Germany of the National Socialist Underground has been cancelled as a result of a Constitutional Court ruling in favor of SABAH. The Munich court has reallocated seats for the press, devoting a four-accreditation contingent for Turkish press members. The press members that will be selected to witness the Neo-Nazi trial first-hand will be determined through a drawing.

A drawing held on April 29th, will determine which Turkish press establishments will be accredited to witness the trial of the National Socialist Underground (NSU) cell which is being charged with murdering ten people, eight of which were of Turkish origin.

According to the newly implemented method of accreditation, the Turkish press has been allocated a contingent of four seats in the Higher State Court of Munich. An announcement released by the court stated that they had chosen to cancel the previous accreditation system entirely and have decided to reallocate seats for press members to witness the trial that was postponed until May 6th. The new accreditation application period began yesterday at 13:00 Turkish time.

The new accreditation system will be conducted in three groups. Five seats will be allocated for domestic and foreign news agencies. Ten spots have been set aside for the second group which includes German broadcasters abroad as well as the foreign press. Four spots out of the ten allocated in the second group have been designated for Turkish press members and one spot each was granted to Iranian and Greek newspapers. The third group has been allocated a contingent of 35 seats which will be designated for German press establishments. The accreditation process will come to a close at 00:00 Tuesday. The drawing process for accreditation will be conducted at the Higher State Court of on April 29th in the presence of a notary public.

The Munich court's previous accreditation process had failed to allocate seats to members of the Turkish press. In response, SABAH Europe filed a complaint with the Federal Constitutional Court, which ruled in SABAH's favor. The court ruling stated that a contingent of at least three seats needed to be allocated to members of the Turkish press, resulting in the cancellation of the previous accreditations.