Aid to be delivered to Syria in the next few weeks 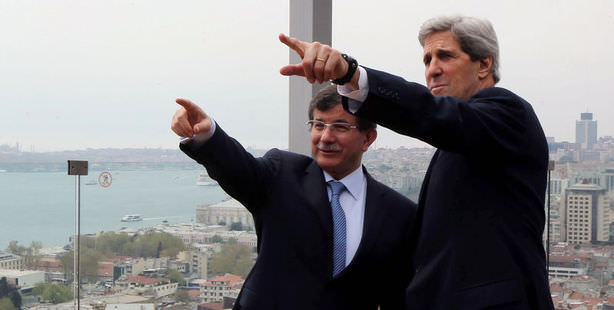 U.S. Secretary of State Kerry announced in Istanbul that the United States will be sending non-lethal military aid to Syria in the next few weeks. “We believe this aid will have a profound effect in the south,” Kerry added.

"We debated the issue of sending aid to Syria with the opposition's foreign backers. We feel that this aid is going to have a profound impact particularly in the south, where some items have been coming in but there hasn't been as good a level of coordination as perhaps there should have been," said Kerry.

The U.S. Secretary of State also said that an agreement by the foreign backers to channel future military assistance via the opposition's Supreme Military Council headed by Brigadier Selim Idris, would speed the delivery of supplies. Kerry said the equipment could include communications equipment, body armor, night vision goggles and medical supplies to assist the insurgents.

Describing the vision put forth by the Syrian opposition during the meeting, as "equality, rejecting extremism and adopting a pluralist democracy," Kerry said, "The most important objective is reaching a political solution. We are ready to support the opposition and therefore we are increasing our non-lethal military aid." Kerry also added that the rebels' foreign backers were committed to continuing support and had decided to channel all future aid through the insurgents' Supreme Military Council.

Kerry also mentioned Turkey's role in the Middle East peace process as well as Turkey-Israel relations, reminding that a delegation had arrived from Israel to Turkey to discuss with Turkish officials the issue of compensation for the bereaved in the Mavi Marmara raid. "Tomorrow will be the first meeting held on the issue, which will also be discussed during Erdoğan's trip to Washington in mid-May." Kerry went on to state the following: "I know that the Mavi Marmara issue is an extremely emotional one for Turkey and that a tragedy of this scope affects a wide segment of society. I have felt the same way in recent days for Boston. In order to solve this issue now, both sides need to display good intentions and I am sure that Turkey will do so."

A NEW ERA IN PALESTINE

Commenting on the situation in Palestine, Kerry said, "We are hoping to play a role in the next few months. However this is just our hope. I can say that Palestinian leader Mahmoud Abbas is extremely determined to reach a resolution. We will continue the peace process from where we left off."

MEETINGS WITH DAVUTOĞLU AND ABBAS

Foreign Affairs Minister Ahmet Davutoğlu and U.S. Secretary of State John Kerry met for a working lunch at the Conrad Hotel in Istanbul. Later, Kerry met with Palestinian President Mahmoud Abbas. Kerry then went on to hold the press conference with Davutoğlu, after which he paid a visit to the Fener Greek Patriarchate in Balat before he departed Turkey.

'GAZA TRIP SHOULD BE DELAYED'

U.S. Secretary of State John Kerry also mentioned that the United States has requested Prime Minister Recep Tayyip Erdoğan postpone his planned trip for Gaza at the end of May.

"With respect to the PM's potential visit to Gaza: We have expressed to the PM that we really think it would be best if it were delayed and that we feel it shouldn't take place at this point in time," Kerry said, also pointing out that of course the Prime Minister will be the one who ultimately decides whether he chooses to go at this time. "We thought that the timing of the trip is really critical with respect to the peace process we are trying to get off the ground and that we would like to see the parties begin with as little outside distraction as possible. I think the prime minister listened very graciously and we feel he has been very thoughtful and sensitive of the issue and if needs be we certainly could have further conversations about it when he comes to Washington," Kerry added. Erdoğan will travel to Washington to meet President Barack Obama on May 16.

This is a translation of an article originally written by Şule Güner.