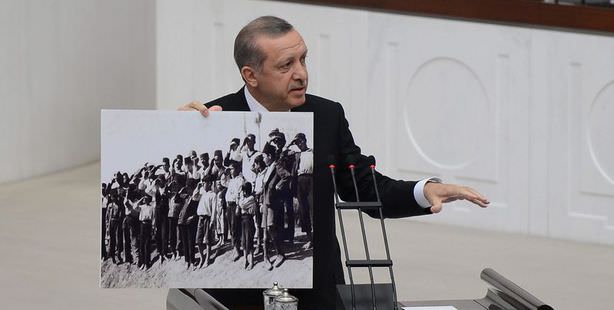 Prime Minister Erdoğan called on the nation to relive the spirit of 1920 and the sense of brotherhood that prevailed at that time during a special session held to commemorate the 93rd anniversary of the assembly’s founding.

"We grew up amidst problems. It is our obligation to entrust to our children a Turkey whose problems are solved or at least on the way to being resolved. We grew up with constitutions drafted during times of struggle. However, it is both our obligation as well as our assembly's to hand over a constitution to our children that is democratic, participatory, libertarian and embraces all.

The children of this beautiful nation deserve the best of everything. More than anything, they deserve a nation in which they can grow up in welfare and stability, brotherhood and solidarity. They deserve to grow up with their mother and father and to be embraced by their parents every night. Even if we remain on our own, and are left alone, we will still continue to struggle to build a brighter Turkey."

The Turkish Grand National Assembly was established on April 23, 1920, the same day that Atatürk named National Sovereignty and Children's Day.

This is a translation of an article written by Zübeyde Yalçın, Uğur Becerikli, Evrin Güvendik, Hazal Ateş and Mehmet Ali Berber.