“Europe will also benefit from the end of terrorism” 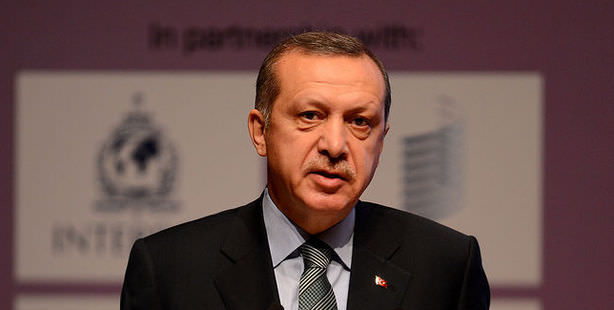 Pointing out that Europe stands to benefit just as much as anywhere else from an end to terrorism, Prime Minister Erdoğan stated, “Turkey is now nearing the end point to reaching a solution to the terrorism issue.”

Prime Minister Recep Tayyip Erdoğan delivered an address at the Seventh Global Congress on Combating Counterfeiting and Piracy held in Istanbul at the Lütfi Kırdar Congress Center on Wednesday. During Erdoğan's address, which focused on the ongoing resolution process, the Prime Minister delivered the following messages

A GLOBAL ISSUE: "Just how the issue of counterfeiting, piracy and smuggling is a global one, undoubtedly the solution will also require global solidarity. No single country can put an end to this sort of global issue on its own. The economic, legal and social constraints of the issue should also be considered," said Erdoğan, adding that the global system should combat the circumstances that lead to this sort of theft such as poverty, injustice and the unfair distribution of income.

REACHING AS FAR AS THE USA: "Terrorism has preyed on smuggling and has therefore become the greatest supporter of trafficking. For years, we have brought this vicious cycle to the global agenda. We have actually put forth all of the evidence and documentation we have that shows the significant measures of human and drug trafficking, illicit funds, piracy and counterfeit goods that enter our country from the east through a significant network established through terrorism and exit through the west spanning so far as to reach Europe and the United States."

A WAVE OF HOPE: "As Turkey, for the past ten years we have been trying to combat terrorism without overstepping the bounds of democracy and security. I am pleased to say that terrorism in Turkey is now nearing its end as a result of the ongoing resolution process that has gained momentum in recent months. The end of terrorism in Turkey has led to a great wave of hope throughout society that a new era of peace, harmony, democratic rights, mutual respect and tolerance will begin. When terrorism comes to an end, weapons are silenced and ideas and politics begin to talk; Europe and other Western nations will undoubtedly come out on top just as much as Turkey and the Middle East.

In an environment in which terrorism no longer exists, the fight against smuggling, counterfeiting, piracy and most importantly human and drug trafficking will be more effective. While in Turkey, no longer will anyone lose their lives to bombs or bullets; in Europe children will no longer poison themselves and ruin their lives with drugs."

WE ARE EXPECTING SUPPORT: "We want neighboring nations to provide a strong contribution to combating counterfeiting, piracy and trafficking, not only for humanitarian and conscious-based reasons, but also for economic reasons. Believe me, when terrorism comes to an end and Turkey has fully secured its borders and peace and stability prevails in the region, counterfeiting and piracy will have received the greatest blow on a global scale," stated Erdoğan.

This is a translation of an article originally written by Zeynel Yaman.
Last Update: Apr 25, 2013 6:41 pm