Kerry requests a two-week delay which Erdoğan refuses to accept 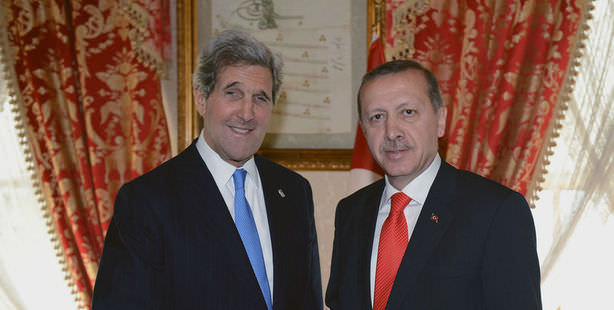 Responding to an initial request by the United States, Prime Minister Erdoğan delayed his trip to Gaza which was originally scheduled for April by two months. However, when U.S. Secretary of State Kerry made a second request for the Gaza trip to be postponed, Erdoğan refused by saying, “There have been no developments yet on the Palestine issue.”

The behind-the-curtains scenario surrounding U.S. Secretary of State John Kerry's request that Prime Minister Recep Tayyip Erdoğan delay his trip to Gaza is slowly being revealed. The highly contentious Gaza trip was originally announced to take place at the start of April; however the U.S. administration requested the premiere postpone the trip by two months. More recently, U.S. Secretary of State expressed that the U.S. administration is now hoping Erdoğan will delay the trip by another two weeks, to follow the normalization deliberations between Palestine and Israel. Ankara however is supposedly refusing to adhere to this second request by the U.S. administration to delay the trip.

It turns out that Kerry's announcement from Istanbul following a meeting with Foreign Minister Ahmet Davutoğlu in which he stated, "We have expressed to the PM that we really think it would be best if it were delayed and that we feel it shouldn't take place at this point in time," was actually an expression of a second request by the U.S. to postpone the Gaza trip, however this time by two weeks. The U.S. administration would like Erdoğan's trip to Gaza to take place in June, which is when they hope to have already embarked on negotiations between Israel and Palestine. However, not a single concrete step or development has transpired between Israel and Palestine, especially when it comes to the Jewish settlements in the West Bank, following the United States' first request for the visit to be postponed by "two months." As a result, Ankara wants the trip to take place now without any further delays.

PUT TO THE TABLE IN THE U.S.

Most recently, Prime Minister Erdoğan expressed his plans to visit Gaza after his scheduled trip to the U.S. however he refrained from giving a specific date. According to sources, Erdoğan will be discussing the issue with U.S. President Barack Obama at the White House during his scheduled trip to Washington which begins on May 16th. Erdoğan and Obama will also be discussing the unification of Palestine as well as the staging of an election in addition to the negotiations that will be held for the normalization of relations between Israel and Palestine. Erdoğan will be mentioning his support for the deliberations between Hamas and Fatah to result in the decision for unification as well as an election. Erdoğan will also be expressing his desire to visit Ramallah as well as Gaza and will also relay his support for the normalization process between Israel and Palestine to begin.

The joint concern shared by the United States, Israel and Fatah, is that Hamas will be strengthened as a result of Prime Minister Erdoğan's visit to Gaza.

"ERDOĞAN'S DECISION IS A NOBLE ONE"

Hamas Spokesman Fevzi Berhum commented on the recent developments by stating, "Prime Minister Recep Tayyip Erdoğan's announcement that he will not be delaying his trip to Gaza despite the United States' request otherwise was an extremely noble move." Berhum went on to state that Erdoğan's decision "represents the magnitude of sentiments felt by Turkey for the Palestinian issue and its public."