Ancestors of the Anzacs meet at sunrise mass 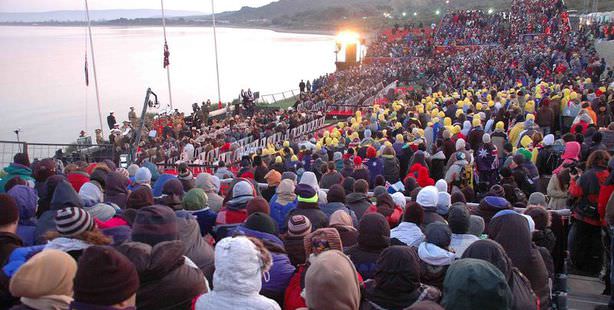 Attending the ceremony was Australia Minister of Veterans' Affairs Warren Snowdon, New Zealand Minister of Defense Dr. Jonathan Coleman, Australian Ambassador to Turkey Ian Biggs, Çanakkale Deputy Governor Faruk Güngör who were joined by thousands of Australian and New Zealand youth who have made the tradition of attending the annual commemoration a form of pilgrimage. Preparations in Anzac Bay began days ago and the thousands that arrived for the April 25th Anzac Day spent the night in a specially-designated area in the bay as they waited for the sun to rise and the ceremony to begin. Over 5,000 people spent the night in sleeping bags as they waited for 5:30 a.m. to arise.

During the ceremony the Royal Australian Air Force Band and the New Zealand Air Force Band played the national anthems, which were followed by a prayer ceremony for those killed in battle to rest in peace. Turkish officers read aloud a letter penned by Atatürk to the mothers of the ANZACS, in both Turkish and English.

Speaking at the ceremony, Australian Minister of Veteran Affairs Warren Snowdon said, "Our Turkish adversaries, underestimated at first and defending their homeland, were the victors here on the peninsula. This battle is now a hallmark in defining our nationhood and what we see as important in terms of mateship, service, sacrifice, courage and commitment."

New Zealand Minister of Defense Dr. Jonathan Coleman stated, "I would like to extend our very sincere thanks to our Turkish hosts on behalf of the Government and people of New Zealand for their gracious hospitality over many, many years. The Turkish people suffered terrible casualties defending their homeland. Over 87,000 sons of Turkey are known to have fallen here. And yet we are welcomed back here every year, with friendship and warmth, to pay our respects to the fallen. Thank you for making these commemorations possible, and for preserving these sites, which are sacred to us all."

After the ceremony, the Australians that had come out paid a visit to their ancestors at the Kanlı Sırt cemetery, while the New Zealanders attended a ceremony held at Chunuk Bair in commemoration of their fallen ancestors who died in battle there.

Meanwhile, during Snowdon's address an Australian citizen by the name of Ali Ersoy began screaming in protest. He was quickly removed from the area and is being questioned by police.