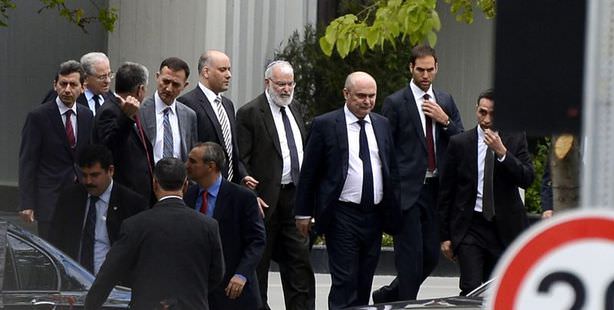 The second round of negotiations to establish the distribution of compensation to the victims of the Mavi Marmara raid will be held next week in Jerusalem.

An Israeli delegation arrived in Turkey on Monday for the first time since Israel apologized for operational errors resulting in the killing of nine Turks by Israeli commandos on the Mavi Marmara. The delegation arrived to Ankara to conduct the first round of negotiations on the compensation to be paid out to the families of victims aboard the Gaza-bound aid ship, a contingent in the normalization of relations between Turkey and Israel.

The second round of negotiations will begin next week and are expected to be held at the Israeli Foreign Ministry in Jerusalem. The aim is to have secured a consensus prior to Prime Minister Tayyip Erdoğan's strip the United States scheduled for May 16.

Foreign Ministry Undersecretary Feridun Sinirlioğlu presented the initial conditions established for compensation to Prime Minister Tayyip Erdoğan and Deputy Prime Minister Bülent Arınç. Before the conditions are finalized, Erdoğan is expected to meet with the victims of the Mavi Marmara raid. It is speculated that Council of Ministers approval may be sought rather than parliamentary approval to finalize the process.

GAZA IS THE FINAL STAGE

Erdoğan's trip to Gaza is currently planned for May 31. This trip will officially signify the fulfillment of Turkey's third condition for relations with Israel to normalize. If up until that date an internal reconciliation transpires amongst Palestinians then Erdoğan's objective is to go to Gaza accompanied by Abbas. While Ankara feels that reconciliation between Al Fatah and Hamas may not be a huge hurdle, the U.S has staked reconciliation between Palestine and Israel as a priority. Furthermore, the U.S. is trying to establish the groundwork for an agreement between Israel and Al Fatah, rather than Hamas.