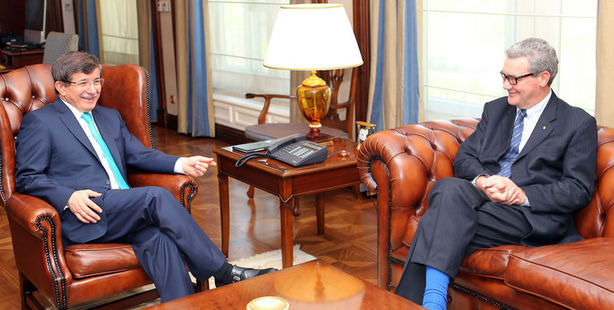 Foreign Minister Ahmet Davutoğlu welcomed the United Nations Secretary-General Ban Ki-moon's Special envoy to Cyprus Alexander Downer in the capital on Monday. Downer is said to have shared the details of his recent talks with Greece, the Greek Cypriot administration and the Turkish Republic of Northern Cyprus (TRNC). Davutoğlu reiterated Turkey's drive to reach a solution to the situation in Cyprus and is said to have repeated the call he made at the United Nations last month to "either press the button or this process will come to an end. The UN parameters will have been lifted."

In a letter sent to the permanent members of the U.N. Security Council as well as to his Greek, British and Swedish counterparts on March 23, Davutoğlu defended the TRNC's rights to gas reserves by criticizing the move by Greek Cyprus to offer up oil that has yet to be claimed from the Mediterranean as assurance to Russia due to the financial crisis by stating, "It is not possible for us to accept the sort of mind frame that says that all of the resources are theirs."