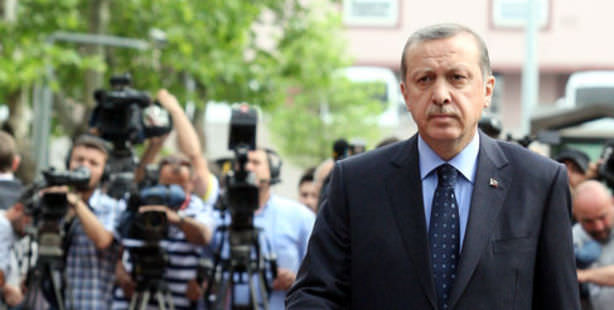 Prime Minister Erdoğan said on Thursday that he no longer considers main opposition leader Kılıçdaroğlu as someone worth responding to. Erdoğan’s attorneys have filed a libel case against the CHP leader seeking one million TL in compensation for his accusations.

Prime Minister Recep Tayyip Erdoğan commented on the inflammatory remarks made by the leader of the main opposition Republican People's Party (CHP) Kemal Kılıçdaroğlu, by stating, "I do not see an individual courageous enough to issue criticism at this level." Erdoğan was referring to the CHP leader comparing him to Syrian President Assad and blaming the Prime Minister for the bombings in Reyhanlı.

Prime Minister Tayyip Erdoğan was speaking at a press conference with European Union Council President Herman Van Rompuy, which followed a meeting held by the two, when he stated the following:

HE IS NOT THAT COURAGEOUS: (On the libel suit opened against Kılıçdaroğlu) I do not consider myself to be someone who should respond to the main opposition chairman because, I do not consider him to be an individual that is courageous enough to issue criticism of that level to the Prime Minister of the Republic of Turkey. Through our state of law, my attorneys will already be responding to him in the necessary manner; if it is compensation, then let it be compensation…"

Remarking that they have already won a number of such cases, Erdoğan recalled how the Mayor of Kayseri chose to use the compensation received by the CHP leader in a previous case by distributing sucuk to lower-income citizens at a festival devoted to the traditional Turkish-style sausage. "I am considering doing the same in Istanbul's Sultanahmet district or maybe in another appropriate location, we will evaluate the situation at the time. Let's have this pool fill up a little more; it is still a little empty. I am waiting for it to fill up completely," said Erdoğan.

PM'S ATTORNEYS HAVE SUBMITTED THEIR PETITION

Through his attorneys, Prime Minister Erdoğan has filed a case for libel against CHP Chairman Kılıçdaroğlu to the tune of one million TL in compensation for his likening of the premiere to Syrian President Bashar al-Assad as well as for stating that the Prime Minister was responsible for the 51 deaths that resulted in twin bombings in Hatay's Reyhanli district earlier this month.

Kılıçdaroğlu made the statements on May 15 from Brussels during a press conference after attending a meeting of the European Parliament Socialists and Democrats Group. Likening Prime Minister Erdoğan to Bashar al-Assad, Kılıçdaroğlu said that both were oppressive and that there was only a difference in tone between them. The comments resulted in EU Socialist group leader Hannes Swoboda cancelling a scheduled meeting with the main opposition leader when he refused to retract his words. Swoboda responded to the CHP Chairman's comments, calling them unacceptable, and stated, "Even though Erdoğan's policies may legitimately be debated, there is absolutely no way he can be compared to Assad, who is a leader waging war and terrorism against his own public."

The petition submitted by Erdoğan's attorney's read, "The defendant may conduct political criticism in the harshest manner; however he cannot commit slander, defamation or attribute crimes. The defendant now needs to face heavy retribution for speaking in this manner."