Environmentalists withdraw from protest as illegal organizations resort to vandalism 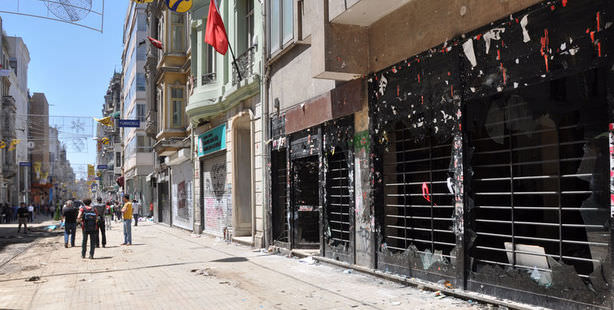 While the protests in Taksim’s Gezi Park came to a halt yesterday, the aftermath of the rage remains. In violence that erupted throughout the country, vandalism resulted in property damage incurred on 89 police vehicles, 42 cars, 22 buses and 94 businesses.

While the police withdrew on Friday night, both Taksim Square and Gezi Park remained occupied by demonstrators. As the effects of tear gas began to wear off, demonstrators spent the night at Gezi Park, the demolition of which sparked the outrage days ago.

Demonstrators ravaged vehicles parked in the square including two broadcasting vans belonging to different television stations as well as two police vehicles and a public bus. As the night progressed, demonstrators then went on to set fire to the construction materials and machinery on site in Taskim. While other protesters unsuccessfully attempted to extinguish the flames, firefighters arrived shortly thereafter to contain the situation.

With the start of rainfall in the early morning hours, demonstrators deserted the square for dry shelter. Some spent the night inside the vehicles they had destroyed. With the first light of day, merchants along İstiklal Avenue began cleaning up their storefronts. The poles hoisting city surveillance cameras had been uprooted all along İstiklal Avenue, while ATM machines and the shopping center owned by the Demirören group incurred excessive damage. First thing in the morning merchants began working on removing the graffiti covering their shutters, while others worked on replacing broken windows in their storefronts.

In the afternoon hours, a number of groups began arriving to Taksim Square. Women and children included, gathered in the square to take part in the lively festive atmosphere, meanwhile however protesters wanting to hold up a poster of the PKK terrorist organization leader Abdullah Öcalan led to the surfacing of tension. Another group reacted to the group trying to wave the flag and protesters had to break the two groups up when tension turned into all-out violence. In the end, the group trying to hold up the Öcalan poster ended up moving to a different area.

The Ankara Metropolitan Municipality has announced that the incidents that have surfaced over the past few days have led to the destruction of 16 public buses, 60 bus stations, over 100 billboards, six Belso fruit juice sales points, metro entrances and handicap access elevators as well as a number of public establishments and institutions. Damage is estimated to cost nearly 20 million liras. The Interior Ministry is requesting all cases of vandalism be reported to the municipality in order for the governorship to assess the damage.

This is a translation of an article originally written by Ali Balcı, Deniz Derin, Ali Şahin and Osman Asiltürk.