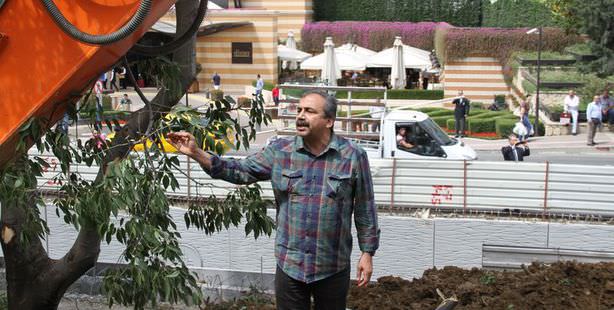 BDP Istanbul Deputy Sırrı Süreyya Önder, an iconic figure in the initial protests against plans to cut down trees for a pedestrianization project, met with President Abdullah Gül and Deputy Prime Minister Arınç yesterday to discuss the escalation of protests which led to violent nationwide demonstrations over the past week.

The two met for one hour during which BDP Istanbul Deputy Önder shared his observations with President Gül and later spoke to reporters to relay information regarding the meetings. Stating that the protests should continue to progress peacefully and take on a festival-like atmosphere, Önder relayed the following messages regarding the recent nationwide uprising which began at Taksim's Gezi Park:

"I have begun to see that the awareness that surfaced amongst the public as democratic processes quickly came into play has also begun to develop in both the state and the government. We need a collective wisdom. Mr. Arınç vowed to initiate a process in which the city will also become part of the decision process when it comes to issues pertaining to the park. This is a very positive development." BDP Istanbul Deputy Önder also stated that he was told that they have begun and will complete a judicial, executive and criminal investigation into the use of excessive force.

"I conducted these meetings as a deputy of the ongoing process and as someone who blocked the demolition on the very first day of protests. I celebrate my comrades' resistance. From here on out, I can suggest the following: The process developed as a result of the public's reflex to challenge what was happening," said Önder also noting that he has witnessed that democratic processes on a state level are now also beginning to function.

PROTESTS SHOULD TURN INTO A FESTIVAL

"I am speaking as someone who holds the public's views at the forefront and did not step back for even a centimeter in this resistance. From here on out, this should turn into a festival. I cannot call on anyone to retract from any demonstration. However, I can advise that we conduct this resistance both democratically and peacefully. Anything that misuses this situation will be the same as misusing the meaning of our struggle," stated Önder.

Istanbul Governor Hüseyin Avni Mutlu is at the top of the list in terms of having an investigation opened against him, said Önder adding, "We will be filing a criminal complaint."

Meanwhile on Wednesday, Deputy Prime Minister Arınç also met with a six-member delegation of the Taksim Solidarity Platform in the Prime Ministry in Ankara to discuss their demands and views.