Police subjected to attacks by protesters say “we are people too” 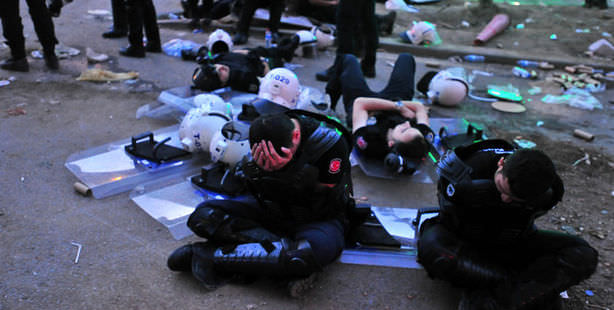 Turkey’s police tasked with containing the nationwide demonstrations that erupted from protests of a redevelopment plan for Taksim’s Gezi Park are also sharing their grievances on social media. In addition to being sleep deprived and insufficiently nourished, they also have complaints to the widespread reactions.

Turkey's police force, which has been widely criticized for their use of tear gas and excessive force in trying to contain the Gezi Park protests which have gone on for a week now, are attempting to explain with photographs what they have had to endure throughout this process on social media websites.

Members of Turkey's police force are offering their own analysis of what they have experienced over the past week. On social media sites on the internet, some entitled 'Türkiyeminpolisleri' (My Turkey's Police), 'Polis Memurları Dayanışma Grubu'(Police Officers Solidarity Group), 'Polis Kürsüsü' (The Police Platform) , 'Yakışıklı polisler' (Handsome Police), 'oyunagelmeTürkiyem Polisine sahip çık' (Don't rise to the bait, stake a claim for Turkey's Police) as well as on personal pages, police are publishing a significant number of messages to explain their side of the story.

The following are a handful of messages accompanied by photographs that have been shared by police:

* "I am not doing this for my own enjoyment. I am here for my bread and butter and I am obligated to fulfill the orders I have been given."

* "I have seen my own relatives and friends amongst the protesters. I am uncomfortable with being placed in this position. They swear to my face. Those that are cursing us, please remove yourself from my friends' list."

* "In the apartment I live in, no one greets me anymore. My sister's colleagues, who work in a private firm, have distanced themselves from her because her brother is a police officer."

* "Right now I am with the Bayrampaşa Riot Police. There are a number of police officers around me that have been working for 50 hours and are in a position of not knowing what they are going to do. We have been working for four days now. We are sleeping on the streets or in vehicles. No one is honestly asking how we are doing."

* "This is Adana… Without allowing any public property to be damaged, without going against the police, without anyone being victimized, they have both waved their Turkish flags and displayed a democratic reaction while supporting the environment."

* "We have temporarily been assigned to Istanbul as reinforcement forces. This is our fifth day. We are with the Bayrampaşa Riot Police. Decent accommodations were not provided for personnel to sleep and rest in Istanbul, a province which has plenty of such opportunities (police schools, police housing, etc.). People are sleeping on the ground. I am lucky because I am going to sleep on a bench. We have been working until the morning four days in a row now, however despite the number of police schools, police housing, etc. they felt it was suitable for us to sleep on the ground.(…) We are requesting and calling on our authorities, chiefs, colleagues and right-minded citizens to please consider what we are trying to draw attention to with the best of intentions in order to do whatever is necessary."

TO THE ATTENTION OF OUR PUBLIC

Members of the police forces are also drawing attention to the conditions they have had to endure by presenting their messages under the title, "To the attention of our authorities, colleagues and public." The following are a series of such entries:

* "The police are tired, sleep deprived and tense."

* "In order to make sure police do not make any personal mistakes they need to be able to receive the required rest."

* "Those of our colleagues who have lost all self-control as a result of the heavy working conditions and their efforts to contain protests which have gone on for days, should retract themselves from areas where protests are being staged and should rest."

* "We are requesting that places such as police housing and police schools be allocated for our colleagues who have been forced to sleep on the streets, sidewalks or in parks."

* "There have been a number of provocative reports against our department that are being spread in the national press and through social media. Please do not pay head to these reports."

* "We are requesting that the public do not pay heed and set aside all provocation attemps directed at police on social media websites."

TO THE ATTENTION OF OUR COLLEAGUES

"We are requesting that you pay extreme care and attention to:

* Being careful of attempts at provocation,

* Refraining from actions that will compromise both yourself and your colleagues,

* Warning and distancing civilians that want to support you,

* Paying extreme care to distinguishing between provocateurs and those who are exerting their democratic rights."