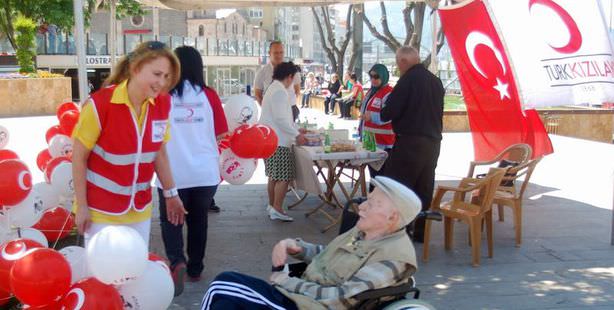 On the 145th anniversary of its founding, the Turkish Red Crescent released an announcement stating that they continue to provide aid and hope to those in need increasingly every day.

Turkey's Red Crescent released an announcement in honor of the organization's 145th anniversary which states that they have become one of the world's most important and the region's largest aid organizations and continue to provide aid and hope to those in need increasingly every day and with further support and trust.

A HELPING HAND TO 78 NATIONS

"On June 11, 1868, a group of idealistic doctors founded a society to bring aid to the wounded and sick Ottoman soldiers which was led by Dr. Marko Pasha as the first president," read the statement adding, "In 1877, the organization was named the "Ottoman Hilali Ahmer Society", which later changed to the Turkey "Hilali Ahmer" Society before being given its final name which has remained to date, the "Turkish Red Crescent Society" in 1935."

The announcement went on to point out that it was Atatürk himself who gave the organization its final name and since then they have extended a helping hand to 78 different nations spanning from the Balkans to Central Asia, the Middle East to Africa and South Asia to the Caucasus.

"Turkey's Red Crescent, which has become one of the world's important and the region's largest aid organizations, continues to provide aid and hope to those in need increasingly every day and with further support and trust."