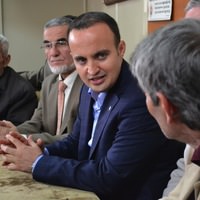 At the press conference he orchestrated at the Parliamentary House, Turan, sated that the Taksim Gezi Park situation served as a result oriented litmus paper test to all.

Adressing CHP Tunceli parliamentarian Aygün, "I would like to mention that one parliamentarian was far from responsibility sharing some very vulgar and offensive posts (over social media)" said Turan. When we look at the Twitter pages of this certain parliamentarian we see claims that the police used chemical weapons, that they drew their guns, in addition to statements such as "Down with this religious fascist dictatorship", "We will not be joined under the flag of Islam but under the flag of the Kızılbaş (extremist Turkish Nationalists)" and terms such as "undignified hoard" were posted."

As for Aygün using the photo of a child that died in the Syrian conflict, claiming it to be Taksim, Turan referred to the act as "the drop that made the cup runneth over (The Turkish equivalent to the straw that broke the horse's back)".

"This certain parliamentarian, had posted these fake Tweets, suggestions, and insults during the single party period of the CHP. Be certain that they would be in awaiting uncertain trial in Court of Liberty… "

"It is only after the important AK Party reforms to freedom of expression that allowed for this comfort and then you accuse them of being dictators?" said Turan.

When asked a question about the possible censorship of Twitter, Turan replied that such a thing was not possible. He went on to say that, "But there are certain principles on what can be posted in a newspaper, or on television; I am on the side that these principles must in the same way be implemented on social media. Our Ministry of Justice is working on this."