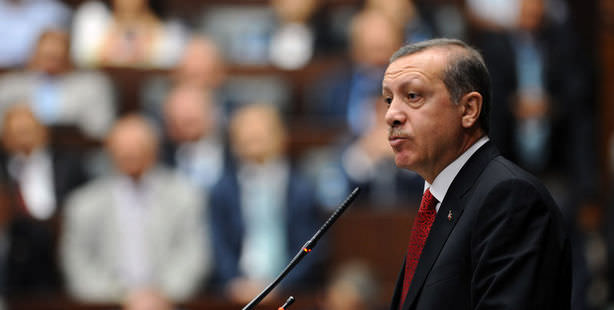 Prime Minister Erdoğan stated on Tuesday that the Gezi protests are part of a professionally organized operation and vowed to hold those behind the events accountable by law. The Prime Minister also said that the police in Turkey have passed the test of democracy.

Prime Minister Tayyip Erdoğan commented on the demonstrations sparked by the Gezi Park protests by stating that they failed to meet their intentions and pledged to hold all of the organizers and provocateurs behind these events accountable by law.

The following are a series of excerpts from Prime Minister Erdoğan's address to the ruling Justice and Development Party's (AK Party) weekly parliamentary group meeting:

* "The Kazlıçeşme rally authentically and meaningfully reflected our nation's sensitivities regarding these recent events. What is said was, 'Can you not see me, are you denying my existence?'As for those who constantly ask if we have received the message of those who gathered in Taksim, I wonder if they have been able to receive the message delivered by hundreds of thousands in Sincan and the over one million people in Kazlıçeşme.

* For the past three weeks, there have been attempts to portray a very different picture of Turkey not only within the nation but also to the entire world. It is being conducted in an extremely planned and organized manner. Our country's strongest advertising companies, certain capital groups, the interest rate lobby, and both internal and external organizations have been prepared for this. Violence, vandalism and barbarism was all filtered out and distorted in order to launch these protests as innocent, democratic and environmental. This was all prepared extremely professionally.

* While the international media and certain international organizations were involved in this plot, certain preparations and false reports were made beforehand in order to convince those who were not involved in the plot. A photograph of an individual who fell of a boat while duck hunting abroad was launched for days as if it was a photograph of someone run over by a panzer. Another photograph of an individual harmed in Syria was submitted by a provocateur CHP deputy himself as if it was a photo of someone harmed in the intervention in Taksim.

* Certain politicians, artists, media establishments and civil society organizations either put these into circulation themselves or encouraged their circulation without researching these fabrications. Within the boundary of democracy and the law, our security forces exhibited a successful struggle against extremely violent demonstrations. In fact, in the face of a comprehensive and systematic movement of violence, our police displayed an unprecedented democratic stance and successfully passed the test of democracy.

* With a single voice they all said the same thing and literally promoted our police all over the world as having exerted violence. It was all of those terrorists, those anarchists and rebels that practiced violence. If they want to understand the true sentiments of Turkey, then they are welcome to come and see this week in rallies in Kayseri, Samsun and Erzurum.

* Yesterday a number of unions called for a strike. What happened? I am especially referring to the Turkish Medical Association when I ask how you could extend an invitation to an llegal demonstration and how you could be a part of efforts to leave hospitals empty? These are supposedly leftists. They have always been in the frontlines of any efforts Republican meetings and Ergenekon demonstrations directed at the national will, democracy, defending the status quo. These are the leading provocateurs, the main pawns. However leftist those who act in bank commercials and then criticize capitalism are, is just how leftist they are. It's time the masks fall.

* From here on out and within the authority granted by the law, the police will no longer overlook any illegalities and will continue to fulfill its duties. We will be further strengthening our police and will be increasing the force used in intervening on these events.

* These voters that feel they are not being effectively represented by their party in parliament are now in a state of hoping they will be aided by the streets. Certain CHP deputies that are aware of CHP's inadequacy have in an extremely irresponsible and low-bred manner pointed to the streets as the address to go by, thereby personally terrorizing the streets themselves.

* Hopefully this period will serve to prosper in the name of Turkey and our nation; we will reap beneficial lessons from this. There is good to come out of everything that happens. We will never allow for a definitive disintegration to result from this process.

* We are investigating and looking into these events. We will be determining one by one in the courts who was behind these incidents, who provided logistic support, who conducted provocation and who exerted violence. We will continue to analyze all aspects of these events and will reveal all of its layers in order to solve these issues.

* Through tolerance and mutual understanding and empathy, we will advance our democracy and freedom to an even further level with our Kurdish and Turkish, Alevi and Sunni and people of all ethnic heritages and religious beliefs. There are certain individuals, no matter what sect they happen to be from, that attempt to provoke certain issues. I want to address my sectarian member brothers to please not rise to the bait and to be sensitive."