“Sincere protesters were made actors in a scenario” 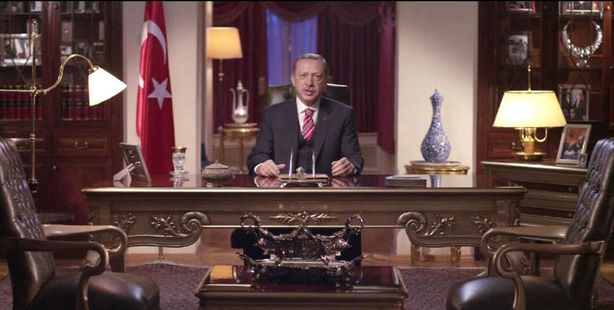 “Turkey has the willpower to foil every game played against the country" said Prime Minister Erdoğan adding that the nation did not allow the ongoing resolution process to be targeted. “Reminding that if the Gezi Park protests had taken place ten-and-a-half years ago, there would have been a heavy price to pay; Erdoğan stated “Turkey’s democracy passed the test.”

Addressing the nation on a television broadcast on Friday entitled "On the Path to Serving the Nation", Prime Minister Recep Tayyip Erdoğan pointed out that the Gezi Park protests erupted at a time in which economic records were being broken and the decades-long issue of terrorism was being resolved. "If these protests had taken place 10 years ago, there would definitely have been more harm on the Turkish economy, and the nation would have been held accountable" said Erdoğan adding that it was the nation's support that allowed them to successfully pass this test of democracy.

May was the most successful month in the history of the Republic of Turkey, stated Erdoğan mentioning that in addition to the positive economic developments, the nation was also resolute in pursuing a peace process that would put an end to over three decades of terrorist violence. "We were no longer going to receive news of death from the mountains… it was at just that point, as records were being broken in the nation, that the Taksim Gezi Park protests began," state Erdoğan.

Stressing that nonetheless the solution process continued with great determination, Erdoğan said, "In a period in which Turkey continues to grow each day, adding new successes to the developments, those who attended the Gezi Park protests, excluding the sincere environmentalists, were taken advantage of either deliberately or accidentally and made to be actors in certain scenarios and in certain schemes against their own country." Erdoğan emphasized that Turkey was not "a country to be played with and subjected to operations" and said, "This great state, with its great nation, has the willpower to foil every game played against the country and to react to those malicious acts."

A TEST OF DEMOCRACY

"Hiding behind the sensitiveness of protecting the environment and the park, the protests aimed at harming our economy, democracy, and the solution process, which basically means our future. However, thanks to the prayers and support of our people, they were unsuccessful in causing us harm or darkening our future. Turkey's democracy has been faced with a serious test to its democracy, which it has successfully passed," Erdoğan said during the televised address to the nation on Friday.

"The resolution process was also not affected by this scheme and due to the good sense of our public, our sense of brotherhood has continued to gain strenth. The best and most successful test was undoubtedly passed by Turkey's economy. If this level of attack had been staged ten-and-a-half years ago, then believe me, Turkey's economy would have been affected greatly and would have suffered heavy losses. However, as a result of the structural reforms we have made, Turkey's economy displayed a successful resistance to these attacks," said Erdoğan.

Prime Minister Erdoğan said, "We are progressing towards our 2023 target. We have planned in fine detail the first five years of this ten-year period. In the next five years, there will be an additional 4 million jobs," said Erdoğan adding that they aim to decrease the unemployment rate to 7.2 percent by the end of the first five-year term. "We are aiming to achieve 5.5 percent growth on average during the years 2014-2018. Hopefully, with this rate of growth, our national income will have reached $1.3 trillion by the end of 2018, with per capita income reaching $16,000 by the end of the next five years," stated Erdoğan adding that they also aim to bring inflation down to 4.5 percent during the same time frame. Stating that Turkey has all the potential and capability to fulfill its targets, the Prime Minister said, "we can make Turkey become one of the ten most developed countries in the world if we just all exert effort and work hard."

Prime Minister Erdoğan also said that unfortunately for the past ten years, Turkey has had to extend a significant amount of energy on internal issues and pointed out that every time Turkey's economy has embarked on a growth trend, or when democratic standards have been risen, Turkey's agenda has been imprisoned by artificial debates and tension, which has made the nation pay a price for its success. "We now have to completely break this vicious cycle," said Erdoğan.

"Turkey is definitely not a country in which the minority can lead the majority as was the case in the past. Such a country would not be democratic; it would not be a social state or one under the rule of law. On the other hand, democracy also does not permit the majority to oppress the minority or ignore their rights. Whatever we experienced as a country and a nation in the past, we did so as a result of the elites in charge of Turkey. Those who miss those days in the past and want their privileges returned to them are of course uncomfortable with this new period of democracy," said Erdoğan.

The Prime Minister went on to pledge that they will continue to adopt the issues of every individual, every ethnicity and every belief group of this nation's population of 76 million people as their own and expressed their determination to solve these issues as well as to continue the resolution process. "We will overcome these issues in a non-violent environment through dialogue, understanding and through meeting on common ground. Despite all of the obstacles and despite all of the schemes and threats, Turkey continues to make strides into the future as a strong country and a strong nation. Hopefully, no one will be able to stop this march of ours and the steps we have taken. With the strength acquired from this nation's history, Turkey will continue to build its future even stronger based on peace and brotherhood," stated Erdoğan.