The Mirage of the Turkish Spring 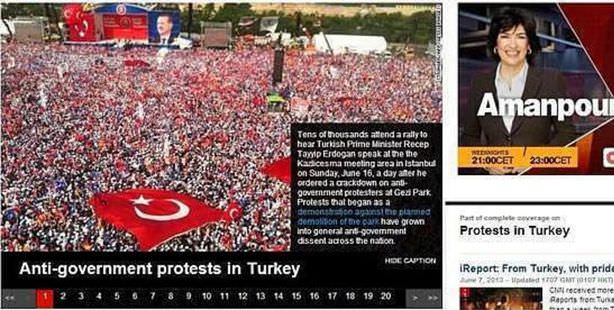 For the past 3 weeks the whole world has been following the occurrences in Turkey, glued to global media giants such as the BBC, CNN, and Reuters along with social sites Twitter and Facebook.

From the "information," articles and perspectives circulating on these media giants broadcasts and social media sites, an image was framed of a Turkey where a restless public sought through peaceful protests to topple the ruling party for violating the principles of Turkish democracy.
The reports of these media giants and the reports of massive casualties and injuries went viral on twitter, even being shared by some Turkish government officials. It appeared as if pandemonium had taken place and Turkey was now a battleground between the public and the Erdoğan government. Though this was not at all true.

As time would tell, many of the gruesome reports were fabricated; the images shared were irrelevant, imported for use from other international and domestic tragedies. Far from true reports, such as those claiming that 300-500 people had been killed sent an angry public to the streets. Among these provocateurs was the CHP's very own parliamentarian from Tunceli, Hüseyin Aygün who actively partook in the sharing of images from irrelevant occurrences claiming them as casualties of the Gezi Park protests. The peaceful protest for the preservation of a small park in Istanbul had now escalated through these false reports, and were now being portrayed in the foreign media as the "Turkish Spring."

Fanning the Flames, the Foreign Media.

Throughout the protests the foreign media had taken a stance siding with the protesters by presenting them as a response to the ruling party's "increasing authoritarianism," rather than as politically-motivated groups with other purposes. These protesters, the very same ones that caused well over 100 million liras in damage to public tax -paid property in Istanbul alone, which among their ranks held members of recognized terrorist groups such as the DHKP/C (which conducted the bombing at the US Embassy in Ankara just this past February), were portrayed as heroic democratic individuals fighting against what was portrayed as a fascist regime. Though this was far from the case.

The democratically elected Erdoğan administration in actuality came to office claiming over 50% of votes in a multi-party system (not to be confused with the dual party system of the US), while the main opposition party received 23-6% . The fallacies seen in the western media were not limited to this alone. There seemed to be constant mention of new alcohol and abortion bans in Turkey in the broadcasts of these outlets. This very "alcohol ban" was accredited as one of the main reasons behind the protests. The fact of the matter is that no such ban exists, as a new law passed this year regulates the distribution and sale of alcoholic beverages in markets after 10pm, without banning them in any way. These laws still allow for the sale and consumption of alcoholic beverages in venues such as bars and clubs way past the market deadline of 10pm. The supposed "ban" on abortions, in actuality, came in the form of new regulations that like the alcohol regulation are less binding than those currently in the US. Reports of this nature made vast circulation across various sources of western media, manipulating the (dis)information in a way to further their agendas, depicting Turkey in a false nature and advancing the smear campaign.

The greatest misrepresentation of the events that transpired at Gezi Park was conducted at the hands of CNN. The Turner Group's media giant took it upon itself to broadcast 8 hours of live coverage from Taksim Square, bringing 2 seasoned war reporters to cover the event. This continuous Gezi Park marathon offered more uninterrupted airtime than any broadcast conducted during the Arab Spring and the wars in both Iraq and Afghanistan. Within this broadcast they neglected to include the statements of the governor of Istanbul, while continuously only focusing on the environmental aspects of the protesters, never once mentioning the underlying political motives or groups that composed the crowds. The protestors were continuously referred to as the people of Turkey, or as the Turkish public, even though statistical data showed that less than 30% of the country's population supported the protests, with their popularity continually declining as the initial outburst wore off and the intentions of various factions became more transparent. When the CNN finally let an advisor to the Prime Minister, Ibrahim Kalın, speak, the CNN's Amanpour cut him short "due to time constraints". This marathon of live coverage was the longest lasting single broadcast the CNN had undertaken since the 9/11 attacks, and ironically so yielded the lowest ratings the channel has received since as well. Even more ironically, it was the CNN's own branch in Turkey, CNN TÜRK that had enraged protesters with broadcasting a documentary on penguins while their parent channel was engaged in broadcasting its Gezi Park marathon, pointing the finger of blame at the Turkish media for censorship.

The greatest farce to be committed by the CNN during this period was yet to be seen. Amidst the protests in Istanbul, the supporters of Prime Minister Reccep Tayyip Erdoğan and the AK Party rallied on the 16th of June in Kazlıçeşme to show their support. This rally would turn out to be the largest in the nation's history, in which over 1 million and 3 hundred thousand would fill the area appropriated; with thousands unable to enter the square gathered on the perimeter. The following day CNN International used the images from the support rally with the caption "Anti-Government Protests in Turkey". Though they saw fit to use the images in an improper context, they neglected to notice all the tell tale signs of false reporting, given that a massive poster of the Prime Minister himself is visible in the background of the image they used for their headline.

The Mirage of the Turkish Spring

Due to the joint efforts of those on Twitter, sharing fabricated news and imported images, and western media outlets, the protests in Turkey were made to look like a country in civil war and turmoil. With these news stories and tweeted reports, the "Turkish Spring", as coined by the Guardian, became the glorified name used vastly to describe the series of politically-motivated protests which saw damages of over 200 million liras in public tax-paid property at the hands of marginal groups seeking "democracy" against their democratically elected "dictator".