Turkish pilots kidnapped in Beirut are released and in Turkey 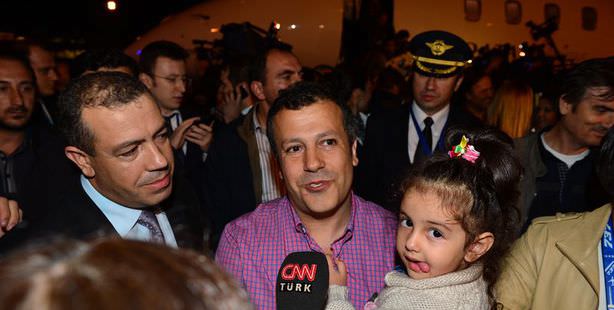 Two Turkish pilots who were kidnapped by an armed group in Lebanon were freed from captivity on Saturday and were flown back to Turkey where they were greeted by their families as well as Prime Minister Erdoğan.

Turkish Airlines pilots Murat Akpınar and Murat Ağca had been held captive in Lebanon since they were kidnapped in early August in Beirut by family members of nine Lebanese Shiite pilgrims abducted in Syria. The Lebanese hostages were also returning to Beirut on Saturday night.

On August 9, the two Turkish Airlines pilots were abducted in Beirut by an armed group said to be family members of the Shiite pilgrims, who ambushed a bus carrying the Turkish Airlines crew from Beirut's international airport to a hotel in the city.

A private jet transported the Turkish pilots out of Beirut's international airport Saturday night and landed in Istanbul at approximately 11 p.m. where they were greeted by anxiously awaiting family members as well as Prime Minister Recep Tayyip Erdoğan.

Murat Akpınar told reporters that they were not harmed in any way during their captivity and said they knew they could depend on their government. The Turkish Airlines pilot said that Turkey followed the right strategy by not staging an operation as they were being held by nearly 100 people and therefore it would have resulted in numerous deaths.

Lebanese Interior Minister Marwan Charbel stated that the nine Shiite pilgrims, who have been held captive since May of 2012 and crossed into Turkey on Friday, are expected to arrive at the Beirut international airport, and added that there was a celebratory environment in the Lebanese capitol.