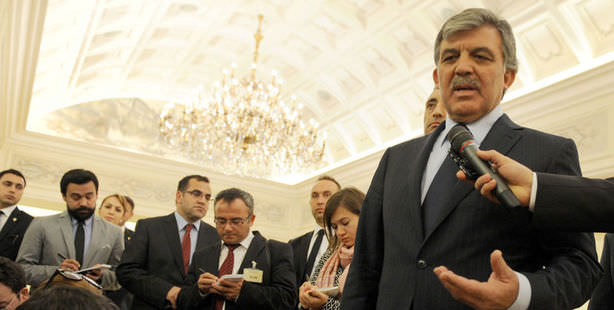 Speaking to reporters on Wednesday, President Abdullah Gül stood up for Turkey's National Intelligence Organization (MİT) Undersecretary Hakan Fidan, who has been under fire since articles released in the foreign press alleged he revealed the identities of ten Israeli spies to Iran. Earlier this week Israeli Foreign Ministry spokesperson Yigal Palmor denied that the Washington Post article by David Iganatius, which accuses Turkey's intelligence chief of divulging information on MOSSAD agents to Iran, was not based on information provided by official Israel sources. Palmor also stated that the article released last week intended to complicate a current rapprochement between Israel and Turkey.

Responding to reporters' question following a meeting with Japan's Ambassador to Ankara Yutaka Yokoi in the capital, President Abdullah Gül stated, "MİT and its Undersecretary, fulfill their duties in the best manner possible by working for Turkey's national interests. There may be circles who are uncomfortable with these activities," said Gül referring to recent attempts to draw up certain conclusions as being systematic. "No one should be influenced by any of this. Turkey's own independent policies and interests supersede everything. Therefore, what is written and drawn up abroad is not that significant."

Gül's comments came after Prime Minister Recep Tayyip Erdoğan also weighed in on the allegations against intel chief Fidan, while speaking to reporters in Ankara on Wednesday prior to his departure for Kosovo. "Those who can talk do and we do not have the right to ask anyone why they spoke in that manner," said Erdoğan.

Commenting on the Israeli Foreign Ministry Spokesman Palmor's denial of Israel being a source to the Washington Post column, Prime Minister Erdoğan stated, "Due to Israel releasing a statement on the issue, we have to, whether we like it or not, believe their statement."

PM Erdoğan stated that they will always stand by their bureaucrats and will not allow them to fall prey to others. "Disloyalty with our fellow seatmates is not in our book. This includes our Chief of General staff, our National Intelligence Organization Undersecretary and our politicians," said Erdoğan.

President Gül also commented on the reaction and criticism from the west on a Chinese firm winning a tender for Turkey's long-range missile defense system by stating, "Turkey always places high importance on allied relations. Within this framework of reaching a conclusion on this system, the integration of these missiles to be purchased has always been discussed. These are the technical issues. There is no reason to reach any other meaning from this situation. In addition, there are these sorts of processes in play in other NATO nations," said Gül.

The President added that there is nothing more natural than a nation making their national interests a priority. "The technical issues have been accounted for and this decision was reached," stated Gül.