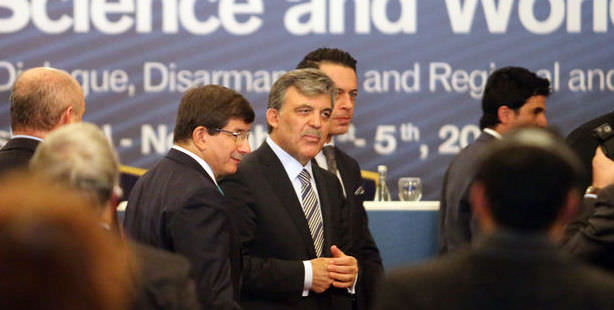 Speaking at an international conference on global security in Edinburgh, both President Gül and Foreign Minister Davutoğlu expressed that Turkey is against the existence of weapons of mass destruction in the Middle East region.

President Abdullah Gül departed for the Scottish capital of Edinburgh on Friday to participate in the 60th Pugwash Conference on Science and World Affairs on "Dialogue, Disarmament and Regional and Global Security". Prior to his departure from Istanbul, Gül commented on the new precedent set in Turkey's parliament on Thursday by the entrance of four lawmakers wearing headscarves, thereby lifting a decades-long ban. "Everyone was happy," said Gül who thanked all political parties and added that everyone contributed to this normalization.

Speaking on the opening day of the 60th Pugwash Conference on Science and World Affairs, President Gül stated that Turkey is against all forms of weapons of mass destruction including nuclear arms and believes a principle-based approach needs to be taken in order to free the world entirely from this form of misfortune.

"We are against all forms of weapons of mass destruction in our region and are in favor of their elimination. We believe it is a threat to global peace to own such weaponry. The use of such weapons in the Iran-Iraq war in the 1980's, in Halabja in 1998 and most recently seen in the suburbs of Damascus depicts the gravity of using chemical weapons." Stating that he believes the possession of these types of weapons and efforts to develop new ones will only result in a new regional race, President Gül noted the varying stance on weapons of mass destruction for different countries, which he said will ultimately harm the elimination of these sorts of weapons from this world. This contradiction must be recognized emphasized, Gül adding, "While it is considered legitimate for certain countries to possess advanced weapons with extreme destruction capabilities, it is considered illegitimate for other countries to acquire chemical, biological or radioactive weapons, which they harbor due to their being less expensive and easier to acquire." President Gül also emphasized that Turkey supports the process adopted by a UN Security Council resolution to eradicate Syria's chemical arms stockpile and expressed the hope that this process will mark the beginning of a regional security structure that will eliminate all weapons of mass destruction in the Middle East.

"Turkey will not tolerate WMDs"

Foreign Minister Ahmet Davutoğlu and Iranian Foreign Minister Mohammad Javad Zarif also attended yesterday's opening session of the 60th Pugwash Conference on Science and World Affairs. "We will not tolerate the existence of chemical weapons in the Middle East under any circumstances," stated Davutoğlu adding, "Turkey would like to see a world free of nuclear weapons."

NO COLLABORATION WITH ISRAEL

Foreign Minister Davutoğlu also commented to reporters following a one-on-one meeting with his Iranian counterpart Mohammad Javad Zarif later in the day on attempts to connect Turkey to recent Israeli strikes on targets in Syria's Latakia by stating, "I am stating truthfully and clearly that there is no way that Turkey has ever or would ever collaborate with Israel on attacking a fellow Muslim country. These reports are all aimed at overshadowing the struggle of the Turkish and Syrian publics."

Davutoğlu also announced that Turkey and Iran have reached a consensus on the necessity for emergency measures to put an end to the humanitarian crisis in Syria and the need for a peaceful transition to allow the Syrian public to determine their own fate through free elections.