PM Erdoğan: “We cannot build a great Turkey on this education system” 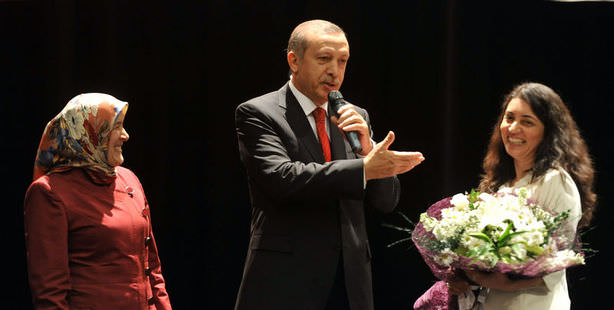 Prime Minister Erdoğan offered criticism of the ‘dershane’ prep school system unhealthily turning the nation’s students into race horses and extended on offer of incentives for transitioning prep schools and an assurance that teachers over the age of 40 will be allowed to teach in public school positions.

On a two-day trip to Trabzon to attend a number of groundbreaking ceremonies, Prime Minister Recep Tayyip Erdoğan made a surprise attendance in a special program held in honor of November 24th Teachers Day.

"We cannot build a great Turkey on an education system like this. A system in which children become like race horses starting from primary school until they finish university, in which they are disconnected from life, is not healthy. Our children do not play games, they do not chat, they do not do sports and do not set aside time for art. Five days a week they go and come from school and on the weekends the go and come from these prep schools," stated Erdoğan.

Calling it a disrespect to teachers when students go to these exam prep schools where all they learn are test-taking techniques, Erdoğan stated, "Let us not kid ourselves, is a summary of 13 years of education provided there in just nine months?"

Prime Minister Erdoğan extended an offer of incentives to 'dershane' owners and stated, "If you want to make a contribution to education, come and set up your schools and let us give you lower credit and tax exemptions. We will guarantee students to fill classes. At least we could say that we sent poor students to a private school like this. Come, and if you are sincere, let's do this." Erdoğan also addressed the concern for 'dershane' teachers and vowed to allow the employment of teachers over the age of 40 in public schools.

"Let us not allow this issue to instigate discord," said Erdoğan adding that his own children have had to deal with the coefficient and headscarves obstacles. "My own daughter was faced with not being allowed to study in an Imam Hatip religious vocational school. I sent my daughter to Araklı and had her schooled here, without letting anyone know. This is the first time I am sharing this… She later studied in America and did her masters in London. It seems those wearing headscarves can also get an education," said Erdoğan. "Hopefully, Turkey will never turn back from this atmosphere of spring embraced. We have come this far all together," stated Erdoğan.

A message to Egypt

Prime Minister Erdoğan also commented on the recent downgrade in Egypt-Turkey diplomatic relations during his Sunday speech by stating, "In relations between states, when feelings talk those who act on their emotions will be the ones who lose. We do not act based on our emotions." Underlining that the military's place is clear, Erdoğan stated, "Is it best to be remembered as the murderers of 3,500 Egyptians or as standing by the oppressed. We stand by the oppressed."

This is a translation of an article originally written by Ahmet Topal.