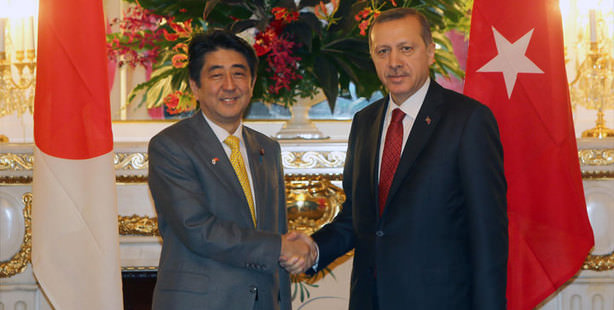 In a meeting with his Japanese counterpart Shinzo Abe, Turkish PM Recep Tayyip Erdogan said that he agreed with Abe on entering into negotiations to strengthen ties between Turkey and Japan. It was stated that negotiations on economic partnership and nuclear power cooperation will be launched between the two countries.

"Turkish and Japanese citizens have been connected to each other for more than 90 years. I would like to remind an academically-accepted fact that both Turkish and Japanese languages belong to the same language family as these nations are relatives in this regard", said Erdogan, hoping to build closer ties with Japan.

Erdogan also expressed his appreciation to be back in Japan after 10 years and thanked his Japanese counterpart, Abe for his hospitality.
Regarding the economic partnership agreement, Erdogan stated that the Gebze-Izmir Motorway Project, believed to be the 4th biggest suspension bridge in the world, connecting Gebze in the east of Istanbul and the city of Izmir in the Aegean region of Turkey, was put into life in cooperation with Japanese engineers. He also pointed out that the Turksat Satellite Project, providing telecommunications and direct TV broadcasting services is the fruit of a Turkey-Japan collaboration.

Erdogan touched on the projects implemented by his government and Turkey's boosting economy during their 11 years in power. "Turkish economy has shown remarkable performance with an annual growth rate of 5%. National income almost quadrupled from US$230 billion to US$786 billion in 2012, and reached US$800 billion as of this year.

Erdogan, referring to international talks on Syria's civil war in Switzerland later this month, stated that today's Syria was the example of an expanding government terror through the whole world as 130 thousand Syrians were killed in unlawful conventional attacks.
"We must make sure that we can open a new era without Syrian President Bashar al-Assad", he added.
Erdogan kicked off his meeting with Abe on the EU's hesitations over Turkey. "Most EU countries, nearly half of them, cannot measure up against Turkey regarding compliance with EU standards."
The agreement to set up the Turkey-Japan Science and Technology University was also signed during this meeting.

Turkish Minister of Energy and Natural Resources, Taner Yildiz, who accompanied Erdogan, stated that the preparatory works to set up the Turkey-Japan Science and Technology University were carried out by the committees of the two countries.
Last Update: Jan 08, 2014 3:12 pm
RELATED TOPICS