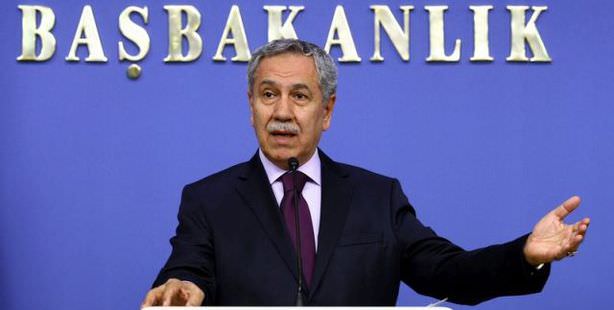 Deputy Prime Minister Bulent Arinc stated that the Gezi Park protests in June and the Dec 17 operation, which erupted during a time of booming economy, were linked.

Deputy Prime Minister Bulent Arinc stated that the Gezi Park protests and the Dec 17 operation aimed at eroding Turkey's ruling AK Party were linked to each other as they were specifically applied across the country.

Speaking on Turkey's booming economy, low interest rate and inflation, and appreciation of the Turkish lira, Arinc noted that the protests in June and on-going operations were conducted to discredit the government.

Deputy PM Bulent Arinc, drawing attention to the link between economic and political stabilities, stated that the economic stability of Turkey can only be ensured through political stability.
"Certain incidents in June and on-going operations since December are misperceived in western countries with a specific struggle to discredit the government."

Deputy PM Bulent Arinc, touching on speculations designed to tarnish the image of the Turkish government, called media outlets to work in favor of Turkey's image.

The Gezi Park protests, which erupted during a time of boosting economy and on-going discussions to resolve Turkey's never-ending terrorism issue, and the Dec 17 operation, resulting in the arrest of the sons of three ministers, renowned businessmen and head of the state-owned Halkbank, are considered to be efforts to usurp state powers and undermine the government.

The Gezi Park protests are believed to be the acts of certain organizations attempting to control the protests in order to channel demonstrations for their own interest and ideologies through the use of social media, political actors and both national and foreign press. In addition to the Gezi Park project, major Turkish construction projects, including the construction of one of the world's biggest airports planned to be located in the north of Istanbul, a US$3 billion bridge project over the Bosphorus were also protested by certain people. While more than 40 percent of hotel reservations were cancelled during the Gezi Park protests, Istanbul's stock exchange experienced its highest one-day loss in the last decade reaching 10.5%.

Regarding the Dec 17 operation, Fethullah Gulen, head of the Gulen Movement, is seen as the man behind the operation. Members of the Gulen Movement within the police force and judiciary carried out dawn raids on offices and homes on Dec 17, detaining 16 people, including the sons of three ministers and the head of state-owned Halkbank. Following the arrests related to the Dec 17 operation, Prime Minister Erdogan denounced the "international groups" and the "parallel organization" for causing tumult in Turkey and discrediting the ruling AK Party. Erdogan underlined that Turkey will not tolerate a parallel organization within the state. Three ministers, including Interior Minister Muammer Guler, Economy Minister Zafer Caglayan, and Environment and Urban Planning Minister Erdogan Bayraktar resigned over the Dec 17 operation as Prime Minister Erdogan replaced 10 cabinet ministers and responded to the operation fashioned by the parallel state with the purging of some 70 officers connected to the operation and curbed the "second wave" aimed at large-scale infrastructure projects.

The Gulen Movement controls a vast global network of schools and businesses. Tensions have grown between PM Erdogan and Fethullah Gulen over the PM's move to shut prep-schools in Turkey.
Regarding the Syrian civil war, with reference to Prime Minister Erdogan's East Asia visit, including Japan, Singapore and Malaysia, Arinc stated that the prime ministers of those countries followed the developments through Turkey's remarks and touched on Turkey's significance in the region and added, "More than 600 Syrians living in Turkey's refugee camps and Turkey's allocation of US$2 billion for those refuges impressed the East Asian prime ministers."

In response to questions directed by western countries on the freedom of the press and journalists who have been imprisoned based on the Anti-Terror Law and the Criminal Code of Turkey, Arinc said that they had strong arguments on this issue, yet Turkey was accused of arresting journalists. The accusatory and slanderous statements made against Turkey included "it is now a crime to speak in Turkey" and "hundreds of journalists are under arrest".

"No journalist has been prosecuted based on occupational identities or statements. On the other hand, as part of the Anti-Terror Law of Turkey, legal action can be taken against journalists who are involved in crimes, yet I regretfully realized that our efforts to cope with those crimes are inadequate," added Arinc.
Journalists were arrested on charges relating to the Ergenekon case and engaging in propaganda for the Kurdish Workers' Party (PKK), which has been involved in a separatist struggle against Turkey since the early 1980s and also considered a terrorist group by Turkey and much of the international community, including the United States and the European Union. Turkey blames the group for the deaths of thousands. The journalists were imprisoned based on the Anti-Terror Law and the Criminal Code of Turkey.