Can pictures be worth a thousand words? 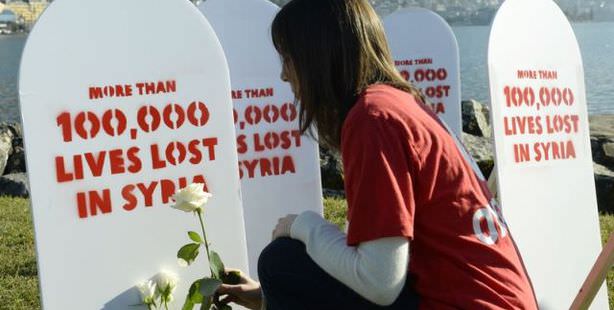 After each and every one of these incidents, the international community neglected Turkey’s previous warnings and rhetorical reactions never translated into action. The major powers could not agree on a course of action and international conferences on Syria turned into a way for the Syrian regime to buy time. Recent reports demonstrate this increasing disinterest among international organizations and states. It was disclosed last week that several Western countries have been meeting with the Syrian regime in secret not to put pressure on the regime, but rather to talk about insurgents in the country.

The recent gruesome pictures from Syria, which according to many observers documents the widespread exercise of torture and mass killings, are the latest evidence provided to the international community regarding the inhumane conditions created by the Assad regime in the last three years. Since the killing of civilian demonstrators in very early phase of the conflict, Turkey and a number of countries have warned the international community about the possible spread of violence and act of mass killings in Syria. In several different instances, Turkish journalists reported the mass execution of civilians in various villages and city centers. The Turkish government in numerous instances reacted harshly to these killings and called on the international community to act decisively to prevent acts of war crimes and crimes against humanity in Syria.

During these early days, many in the region and the West tried to ignore or refute Turkey's warnings. Turkey was also accused of pursuing a sectarian agenda and self-interested position in order to overthrow the Syrian government and bring a friendlier regime under its influence. Some even argued that Turkey was supporting Al Qaeda forces in the conflict. In fact, even in Turkey, the Turkish government faced similar criticisms from certain segments of opposition. They accused the government of being too interested in what was happening in a foreign country, letting Syrian refugees in and spending billions of dollars in humanitarian assistance for Syrians in need during a period of global economic crisis. Despite these external and some domestic pressures, the Turkish government conducted a very principled foreign policy and in fact sacrificed its extremely cordial relations with Syria in order to pursue these principles. Turkish leaders were aware of the possible economic and political consequences, but aimed to follow a foreign policy that would not sacrifice values, principles and rights of citizens for narrow foreign policy interests from the very beginning.

While pursuing this foreign policy stance, Turkey and other regional actors had a chance to warn the international community about an emerging humanitarian crisis in the region. Firstly, the increasing number of Syrian refugees signaled a possible humanitarian disaster which risked not only the lives of millions of people, but also shook the region's ethnic and social stability. In addition, previously revealed videos of mass executions, the images of the use of chemical weapons in the suburbs of Damascus, and the views of the aftermath of barrel bombings on the city centers have already demonstrated the extensive violence that was inflicted upon Syrians. After each and every one of these incidents, the international community neglected Turkey's previous warnings and rhetorical reactions never translated into action. The major powers could not agree on a course of action and international conferences on Syria turned into a way for the Syrian regime to buy time. Recent reports demonstrate this increasing disinterest among international organizations and states. It was disclosed last week that several Western countries have been meeting with the Syrian regime in secret not to put pressure on the regime, but rather to talk about insurgents in the country.

The latest revelation of over 50,000 graphic images constituted another turning point in the Syrian conflict. These horrible pictures did not surprise those who have been warning about these conditions for the last three years. However, these new images of bodies that were tortured, mutilated, and starved to death show the systemic use of these mechanisms throughout Syria against people who were suspected of being members of the opposition. With the latest documents, the international community has been provided all the evidence its needs to act in order to protect the civilians in Syria. The reaction of the international community to these pictures remains to be seen. Following the use of chemical weapons, instead of putting sanctions on the Syrian regime for a major breach of international norms, Western governments gave legitimacy to the Syrian regime under the leadership of the United States. Now, with another major breach of international norms, the Syrian regime is testing the resoluteness of the international community one more time. If the major powers in world politics prefer to award the regime instead of sanctioning it, none of the Geneva meetings will have any kind of legitimacy. The problem in Syria will become not a problem from hell, but rather a problem of creating a hell in the middle of one of the most unstable regions in the world.


Photo: A member of the charity Oxfam places a rose by temporary gravestones in a demonstration against the war in Syria on the sidelines of the Geneva II peace talks in Montreux.