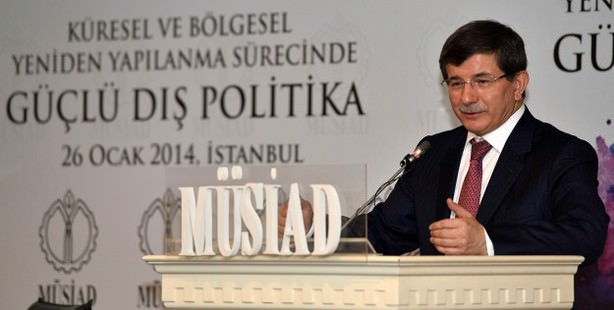 On a recent panel held by the Independent Industrialists and Businessmen's Association (MÜSİAD), Turkish Foreign Minister Ahmet Davutoğlu made significant statements about the state of Turkish current affairs. He mentioned Turkey's stable economy, which is experiencing its most powerful period since the Tanzimat era of Ottoman Empire. He believes that the last 10-year period will be remembered as Turkey's restoration and recovery period.

"They restrained Menderes, Özal and Erbakan from completing their reconstruction processes. They cannot do this again," Davutoğlu said, referencing the late Prime Minister Adnan Menderes who was executed in 1961 after the 1960 coup d'état. The Feb. 28 "Post-modern Coup" during the term of the late Prime Minister Necmettin Erbakan also led to his resignation and the end of his coalition government.

Davutoğlu spoke about the Turkish journalist, Bünyamin Aygün, who was kidnapped in Syria and released on Jan. 5, 2014; he emphasized the government's efforts to secure Aygün's released.

Other points discussed by Davutoğlu during his panel presentation included the Syrian war and Syrian refugee camps in Turkey. "Our aid for Syria has exceeded $2.5 billion. Fortunately, Turkey is a big country. If we did not help Syria, it would be a disgrace for us," he said.

The foreign minister also shared that after taking office his first line of business was to lift visa requirements; today, Turkish citizens are able to travel to more than 70 countries without needing visas.