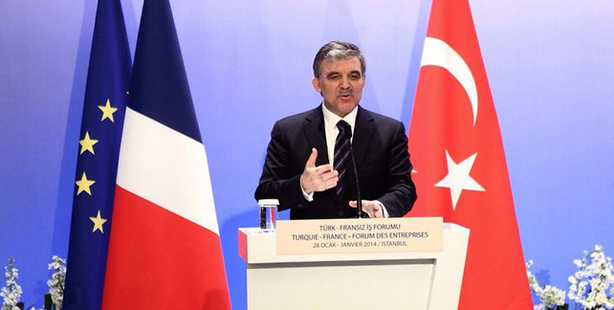 Hollande kick-started his Turkey visit, the first by a French president in more than two decades, with a meeting at Çankaya Palace with Turkish President Abdullah Gül. His visit is regarded as France's attempt to improve strained ties between Turkey and France while boosting business opportunities for French investors.

Dominating the agenda in Turkish-French relations is Turkey's negotiations for European Union membership.

At a press conference with his French counterpart, Gül welcomed Hollande's "positive" stance on Turkey's accession bid. Unlike his predecessor Nicolas Sarkozy, the French president supports Turkey's full accession to EU. He confirmed that his stance remains the same and stressed the process should continue, noting only 14 chapters out of 35 are required to be completed for full accession. On the other hand, Hollande said the final decision to support Turkish membership would be made by the French public, pointing out to a referendum in France at the end of negotiations. Along with France, Austria will also put up Turkey's EU membership for referendum once EU-Turkish negotiations are finalized.

Gül interprets the negotiations as process of Turkey's adaptation to the European Union rather than a means to membership. "We hope there will be no political blockade on this path," he told the French president. He called the European Union"a strategic goal for Turkey" to adhere to its "pacta sunt servanda" (agreements must be kept) principle and continue negotiations. Hollande removed France's block on Turkey's EU negotiations following his election in 2012.

President Hollande underlined that "transparency and goodwill" were essential to negotiations. He said the process should be carried forward by focusing on subjects concerning Turkey such as the rule of law, judiciary independence and separation of powers. Turkey's AK Party government, in its fight against the Gülenist plot to oust Prime Minister Recep Tayyip Erdoğan, recently removed a large number of prosecutors and police chiefs associated with the Gülen Movement from their posts. In a related development, the Turkish government also seeks to reform the Supreme Board of Judges and Prosecutors (HSYK), to curb this top judicial board's immense authority. These moves were criticized by EU officials as an intervention in judiciary.

Another thorny issue in Turkish-French relations is the Armenian "genocide". France, which hosts a sizeable Armenian community, passed a law in 2012 penalizing the denial of the "genocide" by Ottoman forces during World War I. The French Constitutional Court struck down the bill on the grounds that it violated the freedom of speech.

Turkey rejects "genocide" and attributes the deaths to infighting during the wartime. Turkey also claims that the alleged number of 1.5 million Armenian casualties during deportation was inflated.

Hollande, who championed the denial bill, said at his press conference with Gül, that all sides should seek reconciliation. "Uncovering history is painful, but it must be done," he said and added, "We will do what is right." without elaboration.

For his part, Abdullah Gül said the Armenian issue has always overshadowed Turkish-French relations. "It is not right for us to discuss the pains of the past. We should leave this matter to historians," he said.