Turkey is hoping to avoid political obstacles in EU talks 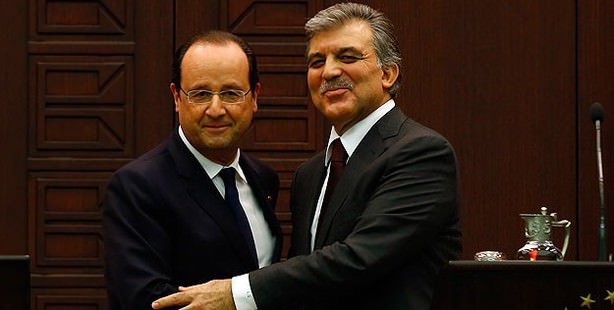 Turkey is hoping to avoid any political obstacles in the discussion regarding its EU membership process, Turkey's President Abdullah Gul said Monday.

During a press conference with France's President Francois Hollande, Gul said: "The negotiation period is a technical process that includes the adoption of legal, economical, democratic, and judicial norms. Our main desire is that this process would not be blocked by political reasons."

When Hollande was asked if he had changed his mind on supporting Turkey's EU accession, Hollande said that Turkey's accession to the EU is not on the country's agenda right now, pointing out that only 14 chapters have been confirmed since 2004.

"I didn't change my mind. But I believe the negotiations should go on, if not, it will come to nothing. The final decision will be with the French people. There is no meaning in agitating fears."

Hollande added: "Turkey's EU membership talks must continue with transparency, respect and bona fide. Even after the negotiation process is over, the related nations will decide if Turkey will be granted membership or not."

"Turkey hosted over 700,000 Syrian refugees even though they didn't have to. If Turkey hadn't had opened its borders for them, we would have been talking about a much more dramatic scene right now."

"Geneva II shouldn't be about ensuring the Syrian regime's position; it should be about forming a transitional period."

250,000 Syrian refugees are currently being sheltered in Turkish camps.

When asked about the threat of people trying to cross the border into Syria, referencing the two French teenagers caught trying to pass the Syrian border on January 20, Hollande thanked Turkey's government on its efforts.

"Turkey averted a humanitarian disaster. I want to thank them on cooperating with us by sharing intelligence. We have to prevent these things from happening again. These are not coherent with the values of the republic."

When Gul was asked about Armenian allegations on the incidents of 1915, Gul said: "It is not a wise move to transfer this mutual pain from generation to generation. This issue should be left to historians. A joint history commission can look at this issue, as a matter of fact, this method was used with France and Algeria's relations as well."

Hollande added: "We will do the right thing, we will seek the truth and we will make everybody understand it."

Gul reviewed Turkey's EU membership talks, adding: "The EU membership process does not necessarily mean the full membership, we respect the French and Austrian people's referendum decision, even if we complete the negotiation period with success."

"I believe Turkey's full membership will be valuable for both the European Union and France," he added.

"It is very pleasing that Turkey and France are cooperating on nuclear energy. Turkey, unfortunately, is dependent on energy imports. We have to increase our alternative energy sources," Gul said.

France's objections to Turkey's potential membership to the EU came from former President Nicolas Sarkozy, who believed that Turkey did not belong in the organization.

Sarkozy, a fierce opponent of Turkey's EU membership, blocked the opening of five so-called chapters -- areas of negotiations with the EU that must be concluded before accession.

However, Hollande's election in 2012 raised hopes of a change in France's stance on Turkey's EU membership. Hollande removed his country's block on Turkey's talks to join the EU, paving the way for resuming the negotiations after a three-year hiatus.

Meanwhile, the parliamentary delegations of France and Turkey held a meeting in the Turkish Parliament.

Hollande's visit marks the first Presidential visit to Turkey in 22 years after Francois Mitterrand, the former President of France.