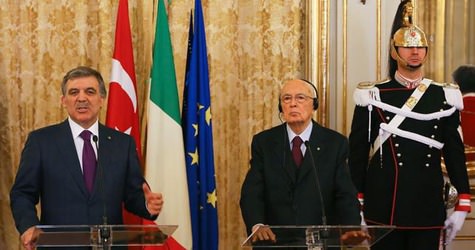 During the joint press conferences, held by two countries' presidents, Turkey's EU bid, regional economic cooperation between the countries and the Syrian civil war were brought to the table.

Napolitano, expressing his appreciation, underlined that bilateral ties and economic cooperation between Turkey and Italy had continuously increased since his last visit to Turkey in 2009.

Napolitano touched upon the global economic crisis, which erupted in the US and later affected the European countries adversely, including Italy. He added that Turkey's economy was not affected by global financial crisis due to sustainable strength of its economic policies.

Hoping to gain a new momentum to Turkey-Italy economic relations, Gül noted that Italy was the fourth biggest trade partner of Turkey as the trade volume between these countries was around US$ 20 billion.

The Turkish Union of Chambers and Commodities Exchanges (TOBB) and Turkey's Foreign Economic Relations Board (DEİK) organized a business forum to flourish trade deals between Turkey and Italy. Scores of Turkish businessmen accompanied Gül on his visit to Italy to attend this business forum on Thursday.

Gül reiterated Turkey's growing economy in contrast with the finance and unemployment issues in Europe and indicated that six million people had been employed in Turkey in the last four years.

Regarding Italy's six month presidency of the EU in the second half of 2014, the Italian President underlined that Turkey belonged in Europe as it was a complementary country in the Europe-Mediterranean, or Euro Med, region; hence, Italy would like to speed up Turkey's EU accession during Italy's EU presidency.

"Even certain EU member countries have adversely affected Turkey's EU process by blocking or freezing the talks on EU chapters. Turkey has Italy's full support on the accession process to the EU." said Napolitano, vowing to revive Turkey-EU negotiations.

In relation to on-going Syrian civil war, Napolitano expressed his support for the Geneva II talks and for the establishment of a transitional government in Syria. He said that such bleeding wounds and such corruptive damages could only be healed with a solution.

Gül further noted that the main reasons behind opening the doors for Syrian refugees were to prevent a refugee catastrophe and to convey humanitarian aid for those in need.