Turkey, Iran to ramp up trade 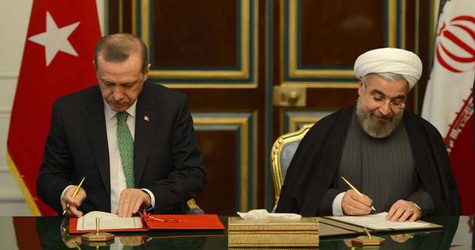 Erdoğan, at a joint press conference with Iranian First Vice President Eshaq Jahangiri, called for increasing bilateral trade volume. Describing 2012 as a fruitful year for trade between Turkey and Iran, Erdoğan noted that the trade volume reached $21.8 billion that year. "Unfortunately, this plummeted to $13.8 billion in 2013. I hope 2014 will be a milestone year for both countries and that we reach $30 billion by the end of 2015," he added.

According to Erdoğan, crude oil and natural gas were two "strategic" imports from Iran, and Iran's exports from Turkey in a variety of sectors are based on a win-win principle. Jahangiri noted that Iran and Turkey had mutual interests and historic ties, adding, "I hope the prime minister's visit will take our relations to a new level."

Erdoğan was accompanied by a delegation of ministers, including the Foreign Minister, Energy Minister, Development Minister, Culture Minister, as well as chairpersons of his AK Party. The prime minister also met with Iranian President Hassan Rouhani in a closed-door meeting. He returned to Turkey after a speech at a forum organized by the Iranian Foreign Ministry and a meeting with Iran's supreme religious leader, Ayatollah Ali Khamanei.

Turkish-Iranian relations thrived after Erdoğan's AK Party took power. Turkey is among the few supporters of Iran's nuclear programme. Despite good relations, Turkey and Iran are at odds over Syria. Iran is a major ally of Syria's Bashar al-Assad, while Turkey openly supports and hosts opposition forces.