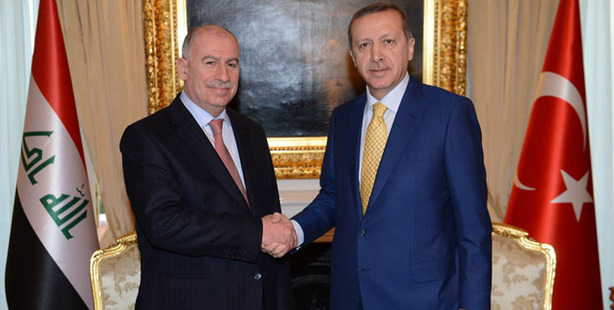 The Speaker of Council of Representatives of Iraq Usama al-Nujayfi held a meeting with Prime Minister Recep Tayyip Erdoğan in Turkey.

The meeting was closed to the press and lasted about 50 minutes.
Al-Nujayfi also met with Ahmet Davutoğlu, Turkey's Minister of Foreign Affairs. It was reported Davutoğlu and al-Nujayfi exchanged information about the developments in Iraq and regional issues. While Davuoğlu informed al-Nujayfi about Turkey's recent contacts regarding Iraq, al-Nujayfi informed the Turkish Minister about his contacts with the U.S. government.

According to information from diplomatic sources, Davutoğlu expressed his dismay about the bombings that occurred in Baghdad yesterday. Two simultaneous explosions took place during rush hour. One of the attacks was carried out near the entrance of the Green Zone in Baghdad, with a bomb-laden truck. The other was carried out at a restaurant in downtown Baghdad by a suicide bomber, killing nine and injuring 16 people. No group has claimed responsibility for the attacks.

Al-Nujayfi will be leaving for Iraq later in the evening.