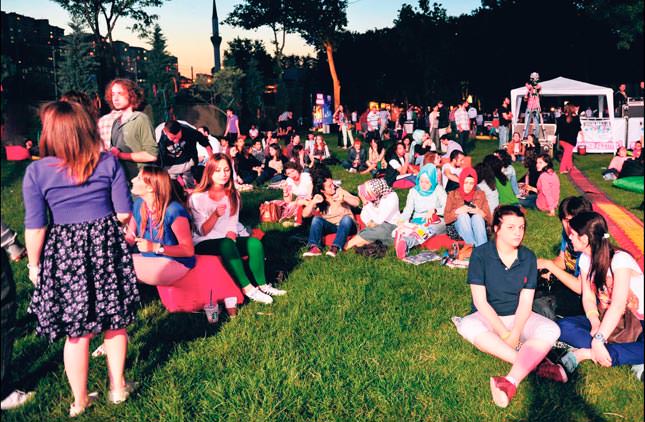 Statistics provided by the European Union show Turkey has the highest number of young people in Europe. However, a recent survey conducted in Turkey, shows that they are largely apolitical

Istanbul (Daily Sabah) - According to Eurostat, the statistical office of the European Union, the number of people between the age of 15 and 29 in Turkey is 18,862,319.

Germany follows Turkey with over 14 million youths, while Liechtenstein has the lowest number of young people out of 29 countries in Europe. Although it has the highest number of youths compared to other European countries, a recent survey by a local nongovernmental organization showed that Turkish youths are apathetic toward politics and spend their leisure time mostly surfing the Internet.

Jointly conducted by the Ankarabased think tank Institute of Strategic Thinking (SDE) and the Civil Servants' Trade Union (Memur-Sen), the survey shows that 21.5 percent of those young people who participated in the poll are "apolitical." The survey included interviews and questionnaires with 3,250 people between the ages of 15 and 35 in 26 provinces of Turkey.

The apolitical nature of Turkish youths has been debated since 1980, the year that a military coup brutally ended violent clashes between politically motivated groups. Experts see the coup as the main impetus that drove youths away from commitment to political causes.

In the survey, participants are asked about their opinions on various issues such as the debate over non-Turkish education at schools, namely elective courses in Kurdish. Results showed that 45 percent of participants see it as a step toward equality, while 31 percent regard it as "a divisive move."

Furthermore, on the Kurdish question, 49 percent of youths see the government's reconciliation process with Kurds as "a move to end bloodshed and resolve problems," while a large percentage of the remaining participants deem it "a process that will lead to division." On last year's Gezi Park protests, 53.3 percent of survey participants consider the protests "an uprising against democracy, organized by violent groups with ties to foreign powers." Critics of Turkey's AK Party government have lauded the protests as Turkish youths shedding their apolitical world view, though the initial peaceful protests were focused on environmental concerns rather than a riot against the government.

More than half of interviewees believe Turkey will not see any more military coups, while 23 percent say there is always a coup risk for Turkey. When asked which European body Turkey should be part of, 41 percent of interviewees answered the European Union.

On their criteria for which political party they will vote, 37.1 percent said they choose their party based on its ideology, while the remaining participants said they prefer assessing parties based on their solutions to the problems Turkey faces or based on party leaders.

On the question of extra-curricular activities, 19.7 percent of participants are card-carrying members of soccer clubs; while 17.5 percent are members of a school club and 14.1 percent belong to religious movements.

They were also asked about their future expectations. Most participants desire "a happily married life," while 22 percent wish for "a respectable job," 17 percent "a good career" and 7 percent "to be rich."

According to the survey, many young people watch TV series, though only 15.5 percent of participants said they preferred watching news channels.

On their alcohol and smoking habits, 51 percent of interviewees said the do not drink alcoholic beverages and 41.3 percent said they do not smoke.