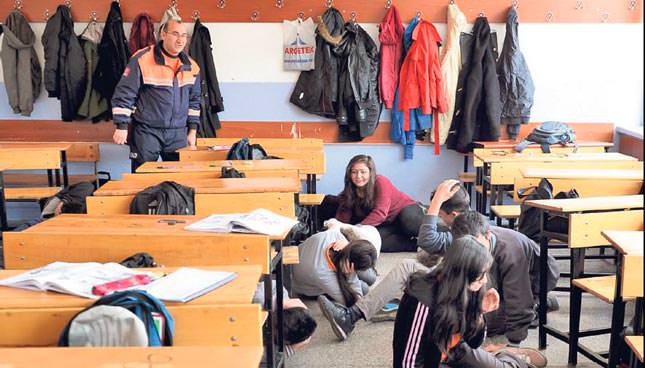 by Mar 05, 2014 12:00 am
Ankara (AA) - The government in Turkey, an earthquake-prone country sitting on several active fault lines, aims to raise awareness about preparation for protection during earthquakes and emergency response after them. The Disaster and Emergency Management Presidency (AFAD) launched a campaign this week during Earthquake Awareness Week to raise such awareness, especially among children and young adults.

As part of the initiative, students in schools will attend training simulations on how to survive an earthquake. AFAD officials will also organize seminars on the issue and distribute leaflets on earthquake awareness to students across Turkey.

Last year, 25,775 earthquakes occurred in Turkey. According to data provided by AFAD, 92 percent of Turkish territory remains under a major earthquake risk. More than six million buildings in the country are estimated to be under risk of serious damage and collapse in an earthquake.

The government launched an urban transformation campaign in 2012 to demolish buildings under risk. Buildings not built to earthquake-safety standards and delayed response in the aftermath led to the deaths of 17,127 people in an earthquake that struck the northwest region of the country in 1999. The earthquake razed poorly constructed buildings to the ground and emergency personnel struggled to cope with the scope of the disaster.

Turkey stepped up measures to prepare for and deal with earthquakes after the 1999 disaster. Measures included reinforcement of undamaged buildings against earthquakes and the introduction of a compulsory earthquake insurance to compensate property losses.
RELATED TOPICS