US reward for DHKP-C leaders 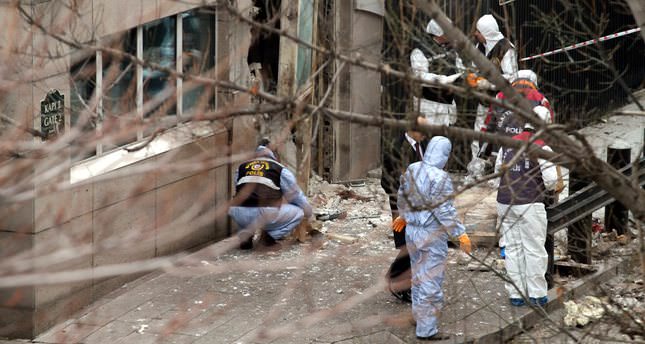 The U.S. Department of State offers a total of $9 million for three leaders of the terrorist group DHKP-C, which had declared it was responsible for the attack on the U.S. Embassy in Ankara last year

ISTANBUL — The United States State Department announced rewards of $9 million total (TL 19.24 million), $3 million each, for information on three leaders of the Revolutionary People's Liberation Party-Front (DHKP-C). The reward is part of the Department of State's Rewards for Justice program. Musa Aşoğlu, Zerrin Sarı and Sehir Demir Şen were named by State Department, which described them as "key leaders" of the terrorist organization.

The DHKP-C is blamed for violent riots during the Gezi Park protests in 2013 and accused of inciting attacks against the police during the violent protests. Months after the Gezi riots, the DHKP-C took to the streets again under the pretext of protesting the death of Berkin Elvan, a Gezi Park protester who died while in a coma due to an injury from a teargas canister. They torched the AK Party offices in Istanbul and clashed with police in March. The group also claimed responsibility for the killing of 22-year-old Burak Can Karamanoğlu, who was shot dead while walking on the street during the Elvan protests in Istanbul's Okmeydanı district.

The organization is known for using protests as a platform to incite violence against security forces. Its gun-toting members were seen in the funeral for Hasan Ferit Gedik, a far-left activist who was killed by a drug gang while protesting activities of that gang in Istanbul's Maltepe district in 2013.

The statement released announcing the reward said Aşoğlu, a resident of the Netherlands, is a member of organization's central committee and leads the DHKP-C's financial affairs and fundraising efforts in Europe.

Sarı is the widow of Dursun Karataş, the founder of DHKP-C, who died of cancer in 2008 in the Netherlands. She is also a member of the organization's central committee.

U.S. officials believe she currently resides either in Belgium, the Netherlands or Germany.

The current location of Şen, another member of the committee, is unknown. Şen, who joined Dev Sol (Revolutionary Left), the predecessor to the DHKP-C in 1980s and became a member of the DHKP-C after its inception in 1994, was last known to be in Greece but is believed to have left the country after Greek operations targeting DHKPC in February. İsmail Akkol, Hüseyin Fevzi Tekin, and Murat Korkut are three DHKPC members arrested in Athens in February during the operations. Akkol was wanted for the murder of Turkish businessman Özdemir Sabancı in 1996 in his Istanbul office, while Korkut was wanted for the rocket attack on the offices of the AK Party.

The DHKP-C, founded in 1978 as a Marxist-Leninist party, is designated a terrorist organization by Turkey, the United States and the European Union.

Under the name of Dev Sol until 1994, the organization claimed responsibility for a series of high-profile murders, including the assassination of nationalist politician Gün Sazak and former prime minister Nihat Erim in 1980. The group also killed several Turkish intelligence officials. In 1994, it was founded as DHKP-C after Dev Sol splintered. The group's terror activities remained relatively minor compared to the Kurdistan Workers' Party (PKK), another terrorist organization targeting Turkey. Nevertheless, the DHKP-C attempted to stage a bloody comeback in the last two years by carrying out attacks against the police. In 2012, about ten years after its last known lethal attack in Turkey, the DHKP-C conducted a suicide bombing at a police station in Istanbul, killing a policeman.

It claimed responsibility for a suicide bombing at the U.S. Embassy in Ankara, which killed a Turkish security guard in February 2013. This was followed one month later by rocket attacks against the Ministry of Justice in Ankara and the headquarters of the ruling AK Party. In September 2013, the DHKP-C claimed responsibility for a rocket attack against the headquarters of Turkish police in the capital. No casualties were reported in all three attacks.

The DHKP-C, originally established as a left-wing movement opposed to "fascist regimes in Turkey controlled by the West" targeted U.S. interests, including U.S. military and diplomatic personnel and facilities and NATO personnel and facilities since the 1990s. During the Gulf War in 1991, the organization claimed responsibility for the killing of two U.S. soldiers in Turkey and targeted NATO and U.S. logistical facilities in various attacks. Following those attacks, Turkey launched a massive crackdown against the group in 1992 and an unknown number of its senior leaders were killed in operations in Istanbul.

The terrorist organization restricted its activities in late 1990s, although it made headlines after a series of hunger strikes by its imprisoned members in 1999 that concluded with a violent crackdown by Turkish security forces against the prisoners. The group changed its tactics in the coming years, using terminally ill people as suicide bombers.

Rewards for Justice was founded in 1984 to help combat international terrorism and paid over $125 million to more than 80 people who helped the United States capture terrorists by providing tips, according to its website.