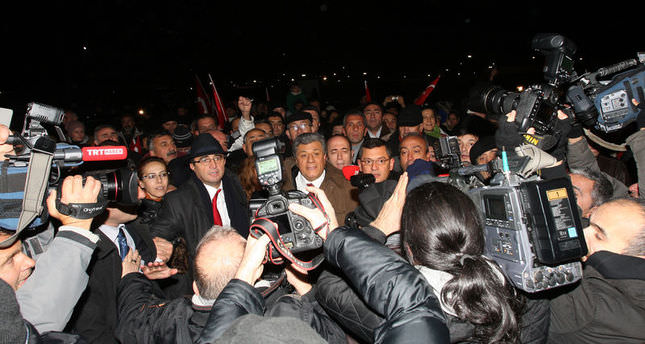 by Daily Sabah Apr 10, 2014 12:00 am
ANKARA — Turkey was one of the leading jailers of journalists in the Committee to Protect Journalists' (CPJ) 2013 prison census; however, significant improvement are expected in this year's census due to the recent releases.

Sources in the Ministry of Justice indicate that as of April 2014, 15 journalists remain in prison. Seven of these journalists have already been convicted, while eight are still on trial. According to the ministry, none of those 15 journalists are in prison on the grounds of crimes related to the profession of journalism.

The sources confirm that the 10 journalists are in prison for being members of an armed terrorist organization, such as the outlawed Kurdistan Workers' Party (PKK), the Revolutionary People's Salvation Party-Front (DHKP-C), the Marxist-Leninist Communist Party (MLKP) and the Communist Party of Turkey/Marxist-Leninist (TKP-ML TİKKO).

Moreover four journalists are in prison due to possession of unauthorized guns, and one of them for being the leader of an illegal terrorist organization.

Judicial reform packages introduced by the government over the last year have improved the climate in terms of freedom of expression and introduced a number of steps toward the elimination of problematic clauses and practices. The packages were intended to bring in new regulations to enable harmonization with the judicial practices of the European Court of Human Rights (ECtHR).

Moreover, reforms also paved the way for a defense in any language in which one feels comfortable, but only under limited conditions.

Furthermore, in the packages, some articles in the Counterterrorism Law (TMK) and the Turkish Penal Code (TCK) related to the creation of propaganda for terrorism and terror organizations, were amended in a way that limits the scope of propaganda crime. As a result of these reform packages Turkey's status in the ECtHR has improved significantly.