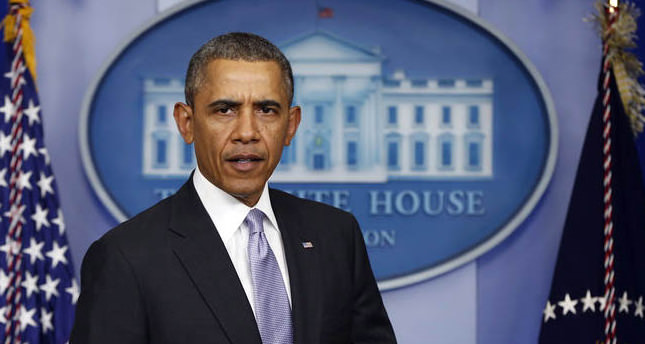 by AA Apr 23, 2014 12:00 am
WASHINGTON D.C. — U.S. President Barack Obama on his annual April 24 statement is expected to use the expression "Meds Yeghern" meaning "Great Catastrophe" in the Armenian language to characterize the incidents of 1915.

April 24 is the date to mark the anniversary of the tragic incidents by the Armenian diaspora. Turkey and Armenia will once again watch attentively what term the U.S. President Obama will use in his annual 24th April statement to commemorate the 1915 event.
During his 2008 Presidential election campaign, Obama used the word "genocide" to characterize the incidents that caused heavy casualties for both Armenians and Turks.

Historically, despite Armenian diaspora's pressure on U.S. presidents to recognise 1915 incidents as genocide, no president apart from former president Ronald Reagan has used the term, causing pressure to be born on the U.S. Congress by Armenians.

Congress members from California and New Jersey, which have high numbers of Armenian-Americans, show sensitivity to the incidents because of voter concerns.

With the influence of the Armenian diaspora, every year resolutions on the 1915 incidents are submitted to foreign relations committees of both the Senate and the House of Representatives.

Recently, a draft resolution related to the issue passed the Senate's committee. However, due to the Easter holiday, the resolution will not be handled earlier than April 24 on the Senate floor. Although the resolution will stay on the list for debate until the end of the Congress' legislative year, the possibility of coming to the floor is quite low as it will no longer be 'meaningful' anymore.

Turkey, being a member of NATO, is an important ally of the U.S. and is a key partner in the Middle East. Consistent with U.S. policy to date, the U.S. does not want to lose a partner like Turkey when dealing with the civil war in Syria, Iran's nuclear policy and Ukraine.

Apart from having strong and long-standing defense cooperation between the U.S. and Turkey, economic ties have visibly increased in recent years. As a result of this, the U.S. is likely not to risk all aspects of its relationship with Turkey for the sake of debatable past between Turkey and Armenia.