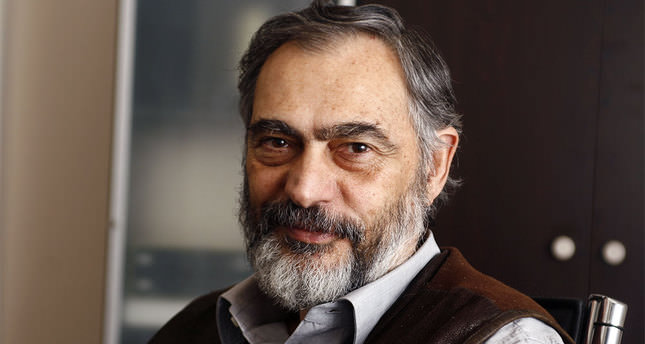 by AA
Apr 25, 2014 12:00 am
ANKARA — Turkey's Prime Minister Recep Tayyip Erdoğan's statement to mark the 99th anniversary of the 1915's tragic incidents on Wednesday is welcomed by Turkey's Armenian intellectuals.

Erdoğan stressed the "common pain" endured during those events and expressed "condolences" to Armenians around the world and said that "Armenians who lost their lives in the events in the early twentieth century rest in peace, and we convey our condolences to their grandchildren."

The prime minister's words were the first from a top official of the Turkish government to sympathize with the Armenians and have been welcomed by the Armenian Patriarchate of Turkey. He said they are glad to receive his condolences to the descendant's of Armenians who lost their lives in the events of 1915, according to a statement released by the General Vicar on Thursday.

Etyen Mahcupyan, from Zaman daily told The Anadolu Agency (AA) that "the new discourse initiated by Erdoğan will certainly lead to normalization of ties with Armenia, because the discourse contains a normalization process in itself."

Jen Psaki, the spokeswoman of the U.S. State Department said, "We welcome Prime Minister Erdoğan's historic public acknowledgement of the suffering that Armenians experienced in 1915," and she added, "We believe this is a positive indication that there can be a full, frank and just acknowledgement of the facts, which we hope will advance the cause of reconciliation between Turks and Armenians."

The statement also referred to the need for research into the 1915 events where in the final days of the Ottoman Empire, the campaign to forcibly relocate 1.5 million Armenians, who sided with the Russian invaders at the time, ended up with the death of thousands of Armenians. The statement urged for research to be carried out by a commission of Turkish, Armenian and international historians.

The Turkish opposition and some Armenian communities criticized Erdoğan claiming the timing of the statement is opportunistic to allow pressure to be taken off the government before the 100th anniversary of 1915 events next year.

However, Mahcupyan said, regarding this criticism, "This is a discourse focusing on conjecture.., but it is fully compliant with AK Party's main policy choices, as it seen in other identity issues, such as the Kurdish and Alevi issues in Turkey."

In September last year, Erdoğan announced a "democratization package" that brought broader political rights, education in mother tongue languages such as Kurdish and tougher penalties for hate speech. The Parliament passed a part of the omnibus law on March.

Mahcupyan claims that the AK Party is pursuing the formation of a new societal ideology in Turkey, and noted, "AK Party's efforts will result in a new way of living together, a new nationalism, which takes multicultural Anatolian society as its base without a religious or ethnic hierarchy."

Mahcupyan showcased the Kurdish peace process and the return of property and artefacts to the Christian minorities, most recently when Turkey returned part of land to the historic Mor Gabriel Monastery Foundation, in Turkey's southeast region in March, as an example of Erdoğan's current attitude towards other ethnic groups and the Armenian question.

This outlook is part of the democratization package announced last September by Erdoğan who covers broader rights on education in native languages, which was long-awaited by the Kurdish population.

Some Nationalist Movement Party (MHP) lawmakers condemned Erdoğan's statement saying that it is a rehearsal before calling the 1915 as "genocide".

Mahcupyan said many people already using the "g-word" referring to 1915 events, and what Erdoğan's statement will enable is the seeking of an objective definition within society-based discussions."

Hayko Bağdat, also an Armenian journalist, said it is too early to decide if the statement is a 'realpolitik' decision or a sincere one, and the only viable test is both time and whether further steps will be taken to compensate past injustices, for example finding the murderer of journalist Hrant Dink.

Bağdat said, "to turn Erdoğan's statement into something real is not only the responsibility of the state, but all of the players, including us ; the civil society, media, universities and others."

In the meantime, he deemed the statement, which the Armenian diaspora waited so long to hear, as "definitely a positive step" by changing the official stance on the issue.

The land which previously belonged to Kuzguncuk Surp Krikor Lusavoric Armenian Church has been returned.

Beziyen Armenian School, has been recognized as the property of Kartal Surp Armenian Church Foudnation.

An old graveyard in Sarıyer is returned back to Yenikoy Kud Dido Asdvadzadzni Armenian Church Foundation.