An agonizing farewell for families 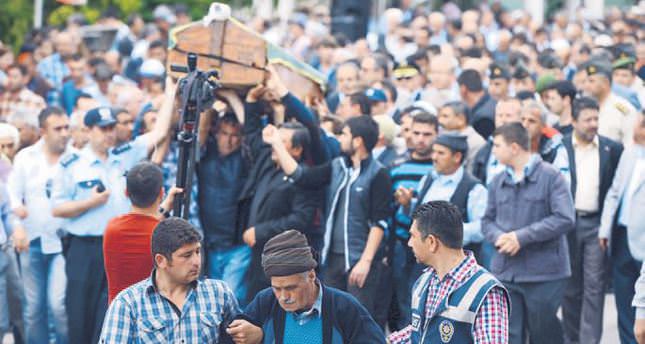 by Daily Sabah May 17, 2014 12:00 am
MANISA — Yunus Yılancı, 35, was buried on Friday in Savaştepe, his hometown in the northwestern province of Balıkesir. Savaştepe is also the hometown of 16 other miners who died in the accident. Hundreds bade farewell to Yılancı including his ailing father who barely overcame his grief when accompanied to the cemetery by a police officer. His sobbing wife and teenage daughter also attended the funeral.

Ahmet Çelik, 32, was buried in Adana, a southern province where his hometown is located. Çelik had moved to Soma five years ago to work in the mines. One year after he started work in the mine, he returned to Adana and got married before returning to work. He had a three-year-old daughter and planned to quit mining and go back to Adana after repaying a bank loan. His parents brought Çelik's body to Adana on Thursday night and after a funeral prayer on Friday, he was buried. Çelik's daughter was unaware of his father's death but his six-year-old son Osman could not hold back his tears as he sat on a mound overlooking the grave and wept.

Osman Özgün, 32, and Aydın Özgün, 42, were two cousins working at the mine. Şahin Özgün, brother of Osman Özgün, was also working in the same mine but took a sick leave on the day of accident after previously hurting his waist. Two cousins were buried in their hometown Bartın, a province in northern Turkey Friday.

Also on Friday, mosques all across Turkey were filled with masses performing funeral prayers in absentia for the miners. Prime Minister Recep Tayyip Erdoğan attended one such prayer in Istanbul.
RELATED TOPICS