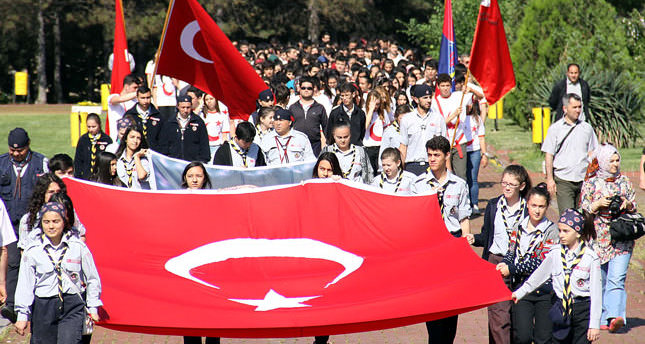 by AA May 19, 2014 12:00 am
ANKARA — The pride of Turkey's independence and the sorrow of last week's coal mine disaster are being experienced simultaneously on this May 19th, President Abdullah Gul said on Monday.

"On this occasion, once more I would like to wish Allah's mercy on our brothers' souls and to extend my sympathies to their families," he said in his 'May 19th Commemoration of Ataturk – Youth and Sports Day' address.

This year's commemoration marks the 95th anniversary of Turkey's founder Mustafa Kemal Ataturk's arrival in the northern city of Samsun from the occupied Ottoman capital Istanbul, which prompted the country's war for independence, as most of the Turkish territories were occupied by allied forces following Turkey's defeat in the First World War in 1918.

"The May 19th stands as a historic step in regards to the emancipation of the motherland and the continuation of our people's existence as a proud and honorable nation," Gul said.

Turkey's Parliament Speaker Cemil Cicek said the joy of commemorating a successful independence war blended with the grief over the coal mine disaster in western Turkey.

"We are feeling an infinite sadness, he said. It is my belief that we will take necessary lessons from this catastrophe which deeply saddened our nation."

Rescue operations in the mine in Soma in the western province of Manisa ended on Saturday after the bodies of the last two miners trapped underground were found, bringing the total of number of fatalities to 301.

The disaster marks the deadliest mining incident in Turkey's history as it surpasses the death toll of a firedamp explosion that killed 263 miners in Zonguldak in 1992.

- May 19 still an inspiration

In his address for the day, Prime Minister Recep Tayyip Erdogan chose to focus praise on Ataturk's initiative in 1919 rejuvenated the embattled Turkish nation.

"This revived spirit continues to be an inspiration for us and to illuminate our path," Erdogan said.

The national day has been observed in all provinces of Turkey with celebrations and commemoration ceremonies.

The main commemoration in Anitkabir – Ataturk's mausoleum – was held in the presence of many of the country's senior officials.

Youth and Sports Minister Akif Cagatay Kilic represented the government in the ceremony.