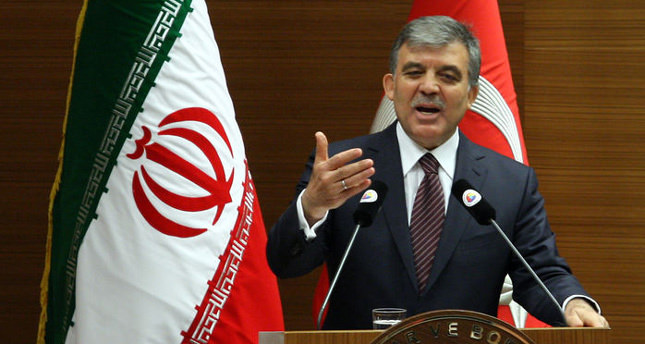 by AA Jun 10, 2014 12:00 am
ANKARA — Turkey's President Abdullah Gül has urged entrepreneurs in Iran to invest in Turkey to help enhance economic ties between the two countries, during a visit to Ankara by Iranian president Hassan Rouhani.

Speaking at the opening ceremony of the Turkey-Iran Business Forum in Ankara on Tuesday alongside his Iranian counterpart, Gul said Turkey and Iran had already completed the legal framework necessary to boost the volume of trade between them.

"Now it is time to implement these agreements that Turkey and Iran have made," Gül said.

Underlining that Iran was a bridge from West to East reaching Asian countries, Rouhani said that Turkey was also a bridge connecting Eastern and Western countries, including Europe.

"Let us connect these two bridges together," he said.

Rouhani said the people of Iran would never forget the support of the Turkish people throughout history and added that, with the decrease in political risks in Iran following the easing of sanctions, Iran now awaited Turkish businessmen and investors looking to increase their operations in Iran.

Gül referred to the Treaty of Zuhab which was signed between the Safavid Empire (now Iran) and the Ottoman Empire (now Turkey) in 1639 and said there had never been any major political conflict between the neighbors since that time, and the borders between the two had never changed.

He also stressed the importance of supporting entrepreneurs in a "win-win" situation and of improving the physical infrastructure necessary for implementing the trade agreements.

Turkey and Iran signed a preferential trade agreement in January to allow tariff discounts, which would enable Iran to purchase agricultural goods more cheaply and Turkey to buy Iranian manufactured products at a reduced cost.

Meanwhile, also speaking at the Forum, Turkey's Head of Union of Chambers and Commodity Exchanges, Rifat Hisarcıklioğlu, said Rouhani's remarks stressing peace instead of war, and dialog instead of conflict, had inspired Turkey and the region.

The Head of Iran's Chamber of Commerce, Gholam-Hossein Shafeyee, thanked Turkey for its support in the private sector and said the two countries should cooperate to diversify the region's economy.