Top judicial body announces reshuffle of over 2,000 prosecutors and judges 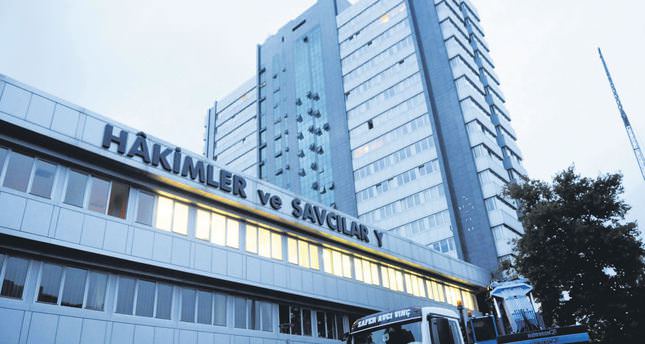 Thousands of judges and prosecutors were reassigned Wednesday night in a mass reshuffling by Turkey's High Council of Judges and Prosecutors, the country's leading judicial body

The High Council of Judges and Prosecutors (HSYK), Turkey's top judicial body, announced a mass reshuffling of the country's judiciary on Wednesday night. The assignment of new chief prosecutors to the capital Ankara and Turkey's largest city Istanbul saw 2,224 switch positions in a number of key Turkish provinces. A chairman of a board within the judicial body, Teoman Gökçe, said he resigned from his post on the same night the reshuffle was announced. Gökçe said his legal, professional and conscientious judgments would be "damaged" if he continued his service. Gökçe stated that the reshuffle was against regulations and claimed some judges and prosecutors were reassigned before their compulsory two-year services ended. In a statement, he said that four separate decrees for reassignment have been issued since January, after the replacement of the HSYK board with new members upon an initiative of the Minister of Justice.

"I have to express with sadness that with the 2014 Summer Decree will be remembered in Turkish judicial history as 'The Decree of Injustice'. There have been similar assignments since January but this is more unlawful, more unprincipled and more inconsistent," he said. Commenting on Gökçe's resignation and statements, Minister of Justice Bekir Bozdağ said he did not receive any notice of resignation. Bozdağ also stated the reassignment was at the disposal of HSYK. "Our ministry has no duty regarding the decrees. This is merely a decree issued every summer," he said.

The move comes amid government's efforts to weed out judges and prosecutors affiliated with the controversial Gülen Movement.
On February 26, President Abdullah Gül approved a bill for the restructuring of the judicial body and the allocation of some of its powers to the justice minister. Some Ministry of Justice officials have been appointed as judges to the Supreme Court of Appeals and other courts. Apart from prosecutors and judges, a large number of police chiefs were reassigned to other cities and suspended over the past months in a purge targeting Gülenists.

The Gülen Movement, commonly referred to as a "parallel state" by the government, is accused of launching unauthorized Dec. 17 operations using police officers, prosecutors and judges linked to the Movement. The operations, which have seen the detention of dozens of people including sons of former cabinet ministers on charges of corruption, are viewed as a plot to discredit and eventually topple the government, according to critics of the operations.

Among prosecutors and judges reassigned is Aziz Takçı, a prosecutor in the southern province of Adana who ordered the search of trucks belonging to National Intelligence Organization (MİT) en route to Syria. Takçı was reassigned to Zonguldak in northern Turkey. Mehmet Yüzgeç, one of the prosecutors conducting the Dec. 17 operations in Istanbul, was appointed as prosecutor in the southern city of Kahramanmaraş. Süleyman Karaçöl, the judge who ordered detentions in the Dec. 25 operations, a follow-up to the Dec. 17 raids, was reassigned to the province of Kütahya from Istanbul.

According to 2013 figures, there are over 12,000 judges and prosecutors in the country and the latest reassignments correspond to nearly 20 percent of the total number of judiciary officials.
RELATED TOPICS