Deputy PM: Number of Syrian citizens in Turkey above 1 million 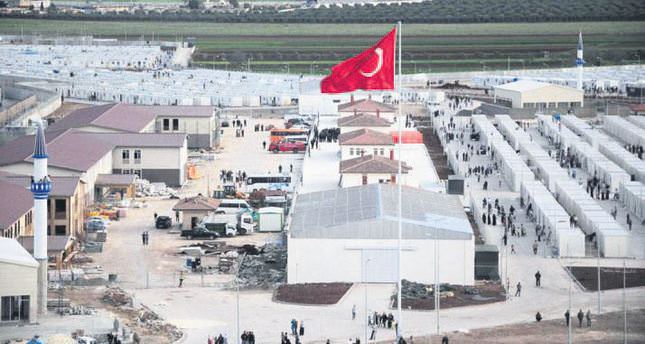 by Daily Sabah Jun 21, 2014 12:00 am
Turkish Deputy Prime Minister Beşir Atalay said that the number of Syrian citizens in Turkey reached 1.05 million, after four years of conflict in the neighboring country that has displaced millions.

Speaking on Thursday, Atalay said Turkey had 22 camps allocated for Syrians and a total of 218,632 people were staying in those camps while the remaining 831,368 Syrians displaced by the civil war were staying elsewhere across the country. "This is a very large population; yet, we have been capable of handling the situation without any problems in four years. Our camps are exemplary in terms of their organization and coordination," he said.

Turkey, along with Syria's other neighbors Lebanon, Jordan and Iraq, sees an influx of people fleeing the conflict in Syria almost on a daily basis. However, the situation takes an opposite turn at times similar to yesterday. Some 300 Syrians including women and children returned home ahead of the Islamic fasting month of Ramadan. Arriving at the closed Akçakale border crossing in southeastern Turkey, the crowd asked authorities to let them cross into Syria. After their registration, Syrians were allowed into Syria. The border crossing has been closed since January 6 for security reasons as clashes in Syria's Tal- Abyad town located across the crossing escalated. Shying away from cameras, Syrians said they wanted to spend Ramadan in their homeland.

The country, which shares a 915 kilometer long border with Syria, maintains an "open-door policy" for Syrians which it describes as "guests" since they are expected to return home after the conflict is over even though there is apparently no end in sight, with no sides gaining an upper hand in four years.

Turkey has spent over $2.5 billion on Syrian "guests" so far and its camps for Syrians are praised by the international community for the exemplary facilities they provide. Within the camps there are schools, handicraft classes, clinics and grocery stores as well as wide spaces for the accommodation of families. Still, the rising number of Syrians seeking shelter challenges Turkish authorities struggling to provide accommodation for them.

Some Syrians on the other hand, prefer not living in the camps and are mostly located in the cities near the border. Wealthy Syrians set up businesses in big cities while the impoverished illegally work in low-paying jobs. Those who cannot find jobs often turn to panhandling and live in makeshift shelters and abandoned buildings in squalid conditions.

Apart from hosting Syrians, Turkey also dispatches humanitarian aid to the suffering population in Syria. Yesterday, the Turkish Red Crescent sent three trucks loaded with food, clothes and tents to the Syrian cities of Latakia and Idlib for the displaced residing in rural areas. Most Syrians fleeing home in those cities live in those rural areas near the border with Turkey.
Last Update: Jun 21, 2014 1:41 am
RELATED TOPICS