Mothers to meet PM, opposition over children recruited by the PKK 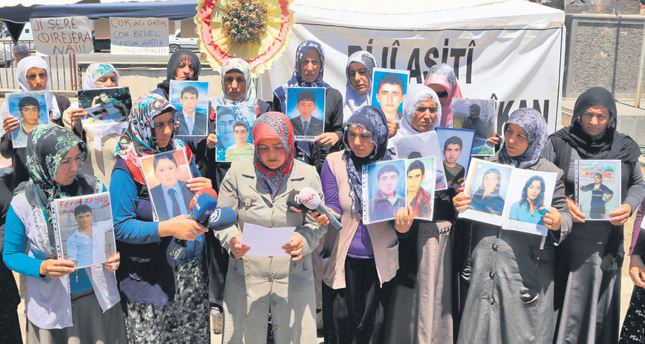 Families have been staging a sitin protest in the southeastern Turkish province of Diyarbakır since mid-May. They requested a meeting with Prime Minister Recep Tayyip Erdoğan and President Abdullah Gül, and the two leaders were expected to receive the families later on Monday. Kurdish families will also attend a meeting of the AK Party lawmakers at the Parliament. They are also expected to hold talks with representatives of other parties.

Speaking to İhlas News Agency, Bedriye Gözlügül, mother of Hayriye and Perihan, two sisters who joined the terrorist organization from the southeastern province of Gaziantep, said the prime minister was their "last hope." "We will also ask for assistance from the officials of opposition parties. We only want our children back, we have no other motives.I hope we will hear some good news after our talks in Ankara," she said.

The families, who first started their sit-in outside the Diyarbakır city hall, later staged a brief hunger strike and relocated to another site in Diyarbakır after the city municipality expelled them from the original site. Up to 130 families took part in the protest at times.

In recent weeks, women were accompanied by their husbands. They chose a small delegation of 30 parents among them to hold talks with the Turkish leaders in Ankara.

The families' protest has been hailed as an unprecedented civil resistance to the terrorist organization that instilled an atmosphere of fear among the Kurdish community from which it draws support. Prime Minister Recep Tayyip Erdoğan pledged to them their children would be returned if the Peace and Democracy Party (BDP), the opposition party affiliated with the terrorist organization, "fails to (mediate) their release."

BDP co-chairman Selahattin Demirtaş held talks with the families in May and reportedly vowed that he would negotiate with the PKK leaders to secure their release. But Demirtaş later claimed the families were "exploited" by the government to garner Kurdish votes.

The PKK, which denies recruitment of child militants in line with its commitment to the Geneva Call declaration it signed to end the practice, had recently announced it would send back any militants below the age of 16 "if detected among the ranks." The terrorist organization released a 16-year-old boy who joined the PKK in March last week. The boy was the son of a woman who has been attending the Diyarbakır protest, like the 15-yearold girl who was rescued by security forces earlier this week after she was persuaded to join the militants.
Last Update: Jun 24, 2014 2:10 am
RELATED TOPICS