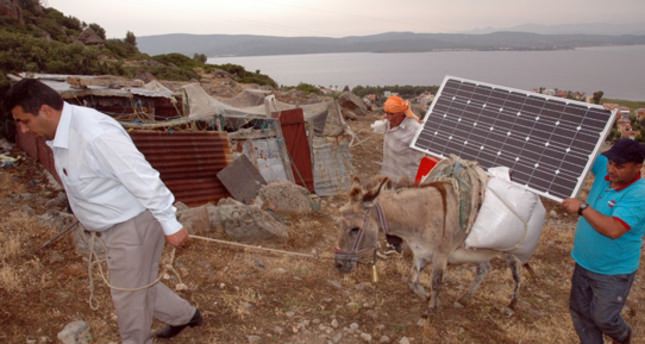 by AA Jul 06, 2014 12:00 am
A Breeders Association in the city of İzmir has carried out a significant initiative when it launched a project allowing shepherds and local breeders to charge their cell phones, laptops and tablets through the placement of solar panels on donkeys.

While the solar panels are placed on donkeys, they are not the only place where solar panels have to be installed as they can also be installed on a sheep fold. Currently, there are 8 different types designed for different purposes including improving the quality of milk and decreasing the number of animal deaths during birth. According to Özer Türer, the president of İzmir Sheep and Goat Breeding Association, using solar panels to create electricity is very simple and expressed one of the benefits of the system is that it is portable. He stated that the initiative has allowed people to access technology in remote places, improving the quality of dairy products as they were unable to preserve milk before because there was no electricity. "It has also resolved the issue whereby shepherds had to go to the town centers to charge their phones" said Türer, who noted the introduction of the system has addressed communication problems faced by breeders and shepherds.

The solar panels allow users to watch TV for up to 6 years, listen to the radio, charge their phones and use their laptops and tablets while allowing them to use lighting at night. İbrahim Özoğul, who has installed a solar energy system in his sheep fold has expressed his pleasure with the system as it has allowed them to lighten their farm and use appliances while preserving milk through a cooling tank.