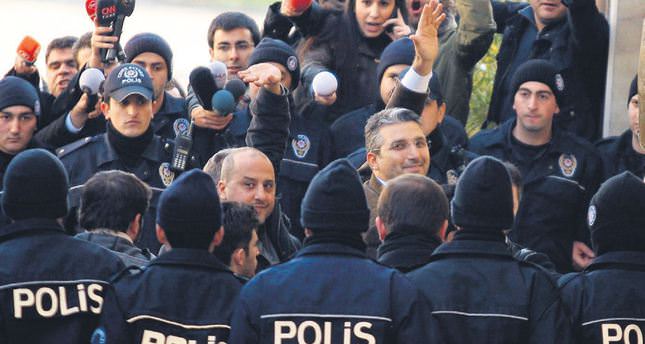 The European Court of Human Rights ruled yesterday that the rights of two Turkish journalists detained in a coup plot case were violated and ordered Turkey to pay a compensation of 30,000 euros in total to the accused men

The European Court of Human Rights found yesterday that two journalists, Nedim Şener and Ahmet Şık, who were jailed by judicial officials linked to the shadowy Gülen Movement for writing books about the threat posed by Gülenists, were wrongly imprisoned and that their rights were violated.

In its ruling issued yesterday, the European Court of Human Rights (ECHR) said the rights of Nedim Şener and Ahmet Şık, who were detained in the Oda TV case in 2011, were violated by a Turkish court on account of their prolonged imprisonment without reasonable cause and has led to "censorship" of the media in the country.

The case was filed by Şener and Şık after they served one year in prison and the court ruled that Turkey should pay 20,000 euros (TL 57,810) to Şener and 10,000 euros to Şık for moral indemnities under Article 10, 5 and 3 referring to "restricting freedom of expression" and "violation of security." The court stated that the journalists should not have been arrested or interrogated due to a lack of concrete evidence.

The ruling claimed both were subjected to a defamation campaign during the trial and imprisonment in an effort to reduce the public's trust and mislead public opinion. Moreover, the ECHR claimed Turkish courts unjustly established a connection between a book criticizing the government written by Nedim Şener and a terrorist organization and has demanded defense from the government over the police search conducted at Şener's house, which was deemed to be in violation of the "protection of journalistic sources," as the search compromised the confidentiality of materials Şener, an investigative journalist, gathered from sources he did not want to identify for their protection.

In a previous interview with Daily Sabah, Şener claimed that the Oda TV case which he was tried under, was handled by judges affiliated with the Gülen Movement which has jailed its critics in the past using coordinated media attacks and fabricated evidence. Şener, a columnist for Posta newspaper told Daily Sabah that he was targeted by the Gülen Movement in the past few years after writing a book about Gülenist police officers' misconduct in the murder of Turkish-Armenian journalist Hrant Dink. "I have written many books detailing corruption allegations against Prime Minister Recep Tayyip Erdoğan and his former Finance Minister Kemal Unakıtan. I never felt that I would end up in jail. When I started to work on Gülenist police officers, [things] clearly changed," he added. Moreover, he has expressed that his allegations about the Gülen Movement put him in a situation which he described as a "plot." For instance, he claimed police officers prepared a case against him with charges that would lead to a prison term up to 32 years. He was acquitted but was later accused of plotting an assassination attempt on Prime Minister Recep Tayyip Erdoğan's son. For over one year he was kept in pretrial detention in 2011 and freed after about one year but he still faces a 15-year sentence pending the outcome of his trial.

Ahmet Şık, the other journalist tried in the Oda TV case, penned "The Imam's Army," a book exposing Gülenist infiltration in the state bureaucracy.
Oda TV has a news website known for its critical coverage of the Gülen Movement and the government. Founded in 2007, the website found itself at the center of an investigation into the affairs of Ergenekon, an alleged criminal gang bent on overthrowing the government.

Oda TV was accused of being a mouthpiece of Ergenekon. Along with Şener and Şık, almost the entire staff of the website was arrested in 2011 after the police raided its offices. Journalists were imprisoned on charges of conspiring with Ergenekon after documents linking them to Ergenekon members were found in their computers though later reports revealed the documents were fabricated.

The Gülen Movement is led by the controversial figure, Fethullah Gülen, who currently lives in a self-imposed exile in Pennsylvania, U.S. The movement is accused of commanding a network of police officers, judges and numerous others in government institutions to carry out his political ambitions and topple the ruling government.