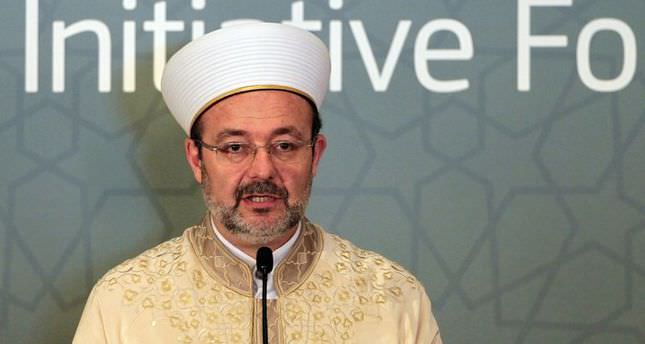 by Jul 22, 2014 12:00 am
The declaration of a "caliphate" by the Islamic State of Iraq and al-Sham (ISIS) militants in Iraq lacks legitimacy and their death threats to Christians are a danger to civilization, head of Turkey's Religious Affairs, the successor to the last caliph's most senior imam, said.

ISIS, an armed group formerly allied to al Qaeda that has captured swathes of territory across Iraq, last month declared its leader, Ibrahim al-Baghdadi, "caliph" - the historical title last held by the Turkish Ottoman sultan who ruled much of the Muslim world.

"Such declarations have no legitimacy whatsoever," Mehmet Görmez, head of the Religious Affairs Directorate, the highest religious authority in Turkey, which, although a majority Muslim country, has been a secular state since the 1920s.

"Since the caliphate was abolished ... there have been movements that think they can pull together the Muslim world by re-establishing a caliphate, but they have nothing to do with reality, whether from a political or legal perspective."

Görmez said death threats against non-Muslims made by the group, were hugely damaging.

"The statement made against Christians is truly awful. Islamic scholars need to focus on this (because) an inability to peacefully sustain other faiths and cultures heralds the collapse of a civilization," he told Reuters in an interview.

Since ISIS's advance across northern Iraq in June, Christians have fled the city of Mosul, where the militants are based, after they were given the choice to convert, pay a religious tax or be executed.

Mosul's Christian community is one of the world's oldest, tracing its roots back two millennia.

Görmez is in a unique position to question Baghdadi's claim to the caliph's seat. His office was created in 1924 to replace the Ottoman Sheikh al-Islam, the mufti with authority to confirm new sultans and who also served as chief legal adviser.

"Its structure has changed greatly in modern times but its historical ties, of course, continue," Görmez said, wearing a grey suit and tie and running worry beads through his hand.

The caliphate itself was abolished in 1924, part of early modernising efforts by Mustafa Kemal Ataturk, who founded the secular Turkish Republic on the ruins of the Ottoman Empire.

Today Görmez's department drafts the weekly sermon delivered at the nation's 85,000 mosques, which it supervises. It also employs all of Turkey's imams - Muslim preachers - who are technically civil servants trained by the state.

The constitution enshrines the directorate's duty to uphold principles of secularism and national unity.

"The caliphate is erroneously viewed as a religious authority by Westerners, who see it like a kind of papacy. But historically the caliphate was a legal entity that accepted religious references. It was a political authority," he said.

Muslims can no longer be unified under the rule of a single ruler like a caliph but could emulate political blocs like the European Union, aligning themselves along shared democratic values, Görmez said, speaking after wrapping up an international conference in Istanbul that brought together dozens of scholars from the Shi'ite and Sunni branches of Islam.

Conflict between the two denominations has been blamed for much of the recent bloodshed in Iraq and Syria, but Görmez said that economic and social factors in areas were the root causes.

"After a century of occupation, dictatorial regimes and suppressed identity, they are trying to express their vengeful anger and hatred by appropriating religion," he said.

"The West looks for the roots of this terror and violence in religion, but these are not the wars of the Middle Ages, which were truly sectarian."

An average of 1,000 Muslims are killed each day around the world, mostly due to internecine strife, he said. "Almost 90 percent of them are killed by other Muslims, by their brothers.

"Muslims need not look beyond themselves for the causes of these conflicts. They should be aware that ... global powers have a responsibility but those are forces they cannot control."