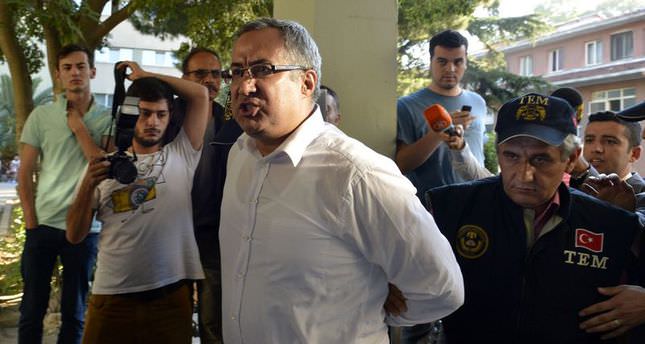 by Daily Sabah Aug 03, 2014 12:00 am
Seventy-nine of 116 Gülen-linked police officers who were detained in an investigation into illegal wiretapping activities for espionage purposes were suspended from duty on Friday.

The officers dismissed from duty include high-level officers such as Yurt Atayün, the former head of the Istanbul police's counterterrorism department, Ömer Köse and Erol Demirhan. A total of 116 police officers were detained while an Istanbul court decided to arrest 31others and eight were released pending trial.

Other than illegal espionage activities, Atayün is also accused of profiling officers within the police department based on their backgrounds and beliefs. According to media reports, Atayün had sent a denunciation letter full of false and distorted information to the armed forces about a lieutenant-colonel who later committed suicide.

Turkish media recently reported that Atayün accepted to confess and reveal documents showing how Gülen-linked agents infiltrated state institutions, mainly the police department and judiciary. Following these allegations, the movement's media outlets started publishing reports claiming that websites published death threats to Atayun and that the Gülen Movement will be accused of the murder.

However, analysts say that the Gülen Movement, which allegedly orchestrated the coup attempts on Dec.17 and Dec. 25, 2013, is actually threatening Atayün so he does not blow the whistle on the movement, and that if he does, he will be assassinated.

After 11 years in power that has seen his government tame the influence of the once-powerful military, Prime Minister Recep Tayyip Erdoğan has declared war against Gülen, accusing him of running a "state within the state."

During his presidential campaign rallies, Erdoğan continuously says that the anti-Gülen probe will widen. "We are currently watching. We will all see what will come out of this," he told reporters at the Turkish Parliament. Asked if the drive to purge Gülenists from state apparatuses would be expanded, he replied, "It looks like it, of course, of course." In a television interview last week, Erdoğan vowed bitterly that the fight against the Gülen Movement would continue "nonstop" while calling on the U.S. to extradite the self-exiled imam from his home in Pennsylvania. "I expect the U.S. to take a stance on the Gülen issue," Erdoğan said.