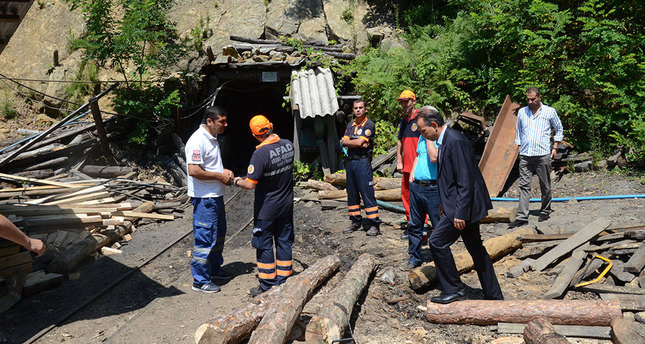 by Compiled from Wire Services Aug 12, 2014 12:00 am
Nine workers who were trapped after a cave-in in a private-run coal mine in Turkey's northern province of Zonguldak yesterday were rescued after hours of efforts.

Speaking to Anadolu Agency, Zonguldak Governor Ali Kaban said the collapse occurred around 03:00 a.m. but the engineer in charge of the mine reported the incident hours later. Kaban said they found out about the accident when the father of one of the miners alerted police when his son did not return from the work. He stated that they launched an investigation on possible negligence for the part of mining company officials.
Rescue crews rushed to the scene and recovered the trapped workers stranded in a 20-meter deep cavity after the collapse.

Kemalettin Günbel, father of Ayhan Günbel, one of the trapped miners, told reporters he went to the mine when his son did not return home after the end of his shift at 08:00 a.m. "I contacted the driver of the shuttle bus to the mine. He told me there was an accident. I came to the mine. The mining company has not contacted police. They were afraid that the media would descend here. I called the police then," he said.

In May, 301 workers were killed in one of the worst mining accidents in Turkey when a fire engulfed a coal mine operated by a private company in the western town of Soma.

Zonguldak is rich in coal resources and has often been the scene of fatal mining accidents in the past. In 1992, 263 miners were killed in a methane gas explosion at a coal mine in the Kozlu district.